Yongnuo Announces a $500 4K Camera with Android, 4G, and a Canon EF Mount

Following on from rumors last year, Yongnuo has announced that it will be releasing a mirrorless camera featuring 4G connectivity, an Android operating system and a Canon EF lens mount. It offers a 5” touch screen, shoots 4K at 30 fps, and allows users to share content on the fly.

Yongnuo has made huge progress in recent years, producing affordable alternatives to some big brands, mostly focusing on lighting units and lenses. The latest innovation seems to have come from nowhere, throwing together a mixture of features that’s not been seen before. The 16 megapixel micro four-thirds sensor from Panasonic sits behind a Canon EF mount, allowing an incredible array of lenses to be used. Shooting 4K at 30 frames per second, the camera will offer 32 gigabytes of internal storage with the option to double the capacity through an SD card. Due to launch in China in April 2019, the camera will cost less than $500.

As Fstoppers’ Mike Smith noted last year, Android could make for the perfect operating system for camera bodies because of its suitability for computational photography, and Samsung has created a few versions of their own. Yonguo is the first to pair it with an EF mount which ties in with the lenses that it has been producing over the last couple of years. A smaller mount may have made more sense, especially given the YN450's slim form and the fact that pairing lenses designed for full-frame and APS-C cameras might have implications when coupled with the much smaller micro four-thirds sensor.

So is the Android operating system the future for ILC cameras? Leave your thoughts in the comments below. 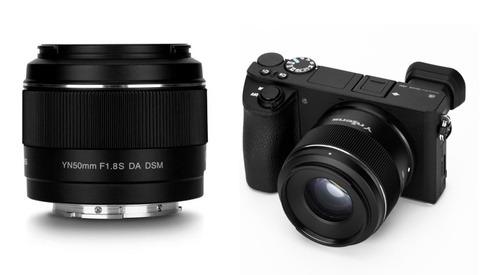 Why in God’s name wouldn’t they give it a micro four-thirds mount??? There’s no advantage to shooting EF mount lenses on that small a sensor.

I'm wondering the same thing. Would have been very interesting with a built-in focal reducer though.

I suppose. That would be even more weight and bulk though.

Because they don't make m4/3 lenses. Just like why Canon doesn't release bodies with F mounts or Sony doesn't make a camera with an EF mount. Why would they not want to release a product that works with their other products?

Because it makes them look like they dont know what they’re doing which makes me less likely to buy any of there products.

Lets be honest, you weren't going to buy it anyways, and probably know very little about the company or what product lines it offers in the first place.

True. Whenever possible I try to buy cameras manufactured in Japan, Germany or Thailand with more ethical labor and environmental laws. So there’s nothing this offers me. Still, I can criticize the design all I want. Whether that means anything to you doesn’t matter to me.

Exactly, Yongnuo has a range of EF mount lenses already. I hope one day Panasonic launches a slim m43 mount phone. That would be amazing.

To keep the costs down obviously. It's a $500 camera and not looking to compete with the Canon 1DX...

I’m saying they should’ve used a 4/3 mount. People who buy this are most likely going to pair it with Canon lenses anyways. No one is breaking down the door to shoot Yongnuo’s.

Well they produce EF mount lenses, so it makes sense to align. How else would you for example sell a kit lens?

Then why did they put micro4/3 sensor ?

And ruin the camera.. good choice.

It makes zero sense for them to, they want to sell their lenses.

Possibly a B-roll camera for filmakers?

That would make a lot more sense. If they released a video-centric Blackmagic style 4/3 camera for $500 that would be amazing.

Just to use behind the scenes, or like for me to give to my kid to shoot with would be worth it.

Agreed, I'd actually have a deeper look at it. But EF on a m43 sensor is basically useless.

If it works the same as their flashes, I wouldn't touch it with a ten-foot pole.

I've had luck with their flashes and wireless triggers. I've been able to get a 3 light set-up with 4 remote triggers for less than one Canon speedlite would cost me. I even have a macro light that works well. My only gripe is that the instruction manuals were utterly incomprehensible. When you are starting out using flashes it would help to have manuals to help explain things.

While I like their flashes and triggers I doubt I would buy a camera from them.

my three flashes, wireless digital trigger and recievers which I have had for four years have been dropped, bashed, squashed, two of the flashes fell down a 10 metre cliff (and survived) ... subject to intense heat.... are probably some of the best photographic investments I have made. They have never overheated, and they have never stalled. Never. The battery door on one is broken so I invested in a rubber band which has not been replaced and which holds the door in place. I have two gripes, one is the weird batttery placement system, the other is the plastic screws tightening the hotshoe mount at time stick .... I have photographer friends who have the top Canon flashes who are as jealous as hell of my set up.
Just last weekend I was in a situation where I needed a go-to back up camera.... to swap from a wide angle to an 85mm for a carnaval parade. At this price? A done deal.

Well, I had three flashes that were cared for that all lost power within a year. One as bad as half power. Guess I got the ones in a bad batch.

I’ve got three of them myself and they’ve never failed me despite costing 60 bucks a piece.

Trust me, it wasn't the batteries. Tested with multiple combos. I use Eneloops, and they work perfectly in every other flash.

Didn't Samsung do something like this a while back?

I personally love this idea and wished that this idea would continue. However, this execution is not that great. I could see a great vloging camera though...

While I love the EF mount, I have to agree that that a 4/3 mount would have been better or a larger sensor to make better photo options. For video, they just need a better variety of frame rates.

Its not all the way video or all the way photography... its a great idea stuck in the middle.

They did one with a 1/2.3 size point and shoot sensor, with a built in zoom lens.

I’d buy this over the Canon RP... just sayin

Well Played Canon ... Very Well Played !!
Now if only Sony made these EF mount cameras ... Sony would be the one and only !