A Bay Area photographer is facing legal trouble for posting a composited picture of the Golden Gate Bridge with the blood moon, which was taken from an “illegal angle.” The Bridge District claims the angle shows that the photographer must have trespassed into a restricted area in order to get the shot and wants the photo removed from his website — something he refuses to do.

Bruce Getty says he is “just a guy who likes to go on the rocks and get a unique angle of the bridge.” After snapping his photo of the bridge, he later Photoshopped another of his images into it: that of the blood moon from 2014. He then uploaded the composited image onto his website, where it eventually caught the attention of the Bridge District, who issued a cease and desist letter. The District is seeking any profits Getty has made from the image, although Getty claims he hasn’t sold any copies of the image and simply wants it for his own portfolio. "I'm just a nobody taking pictures; I like to have fun," he said. 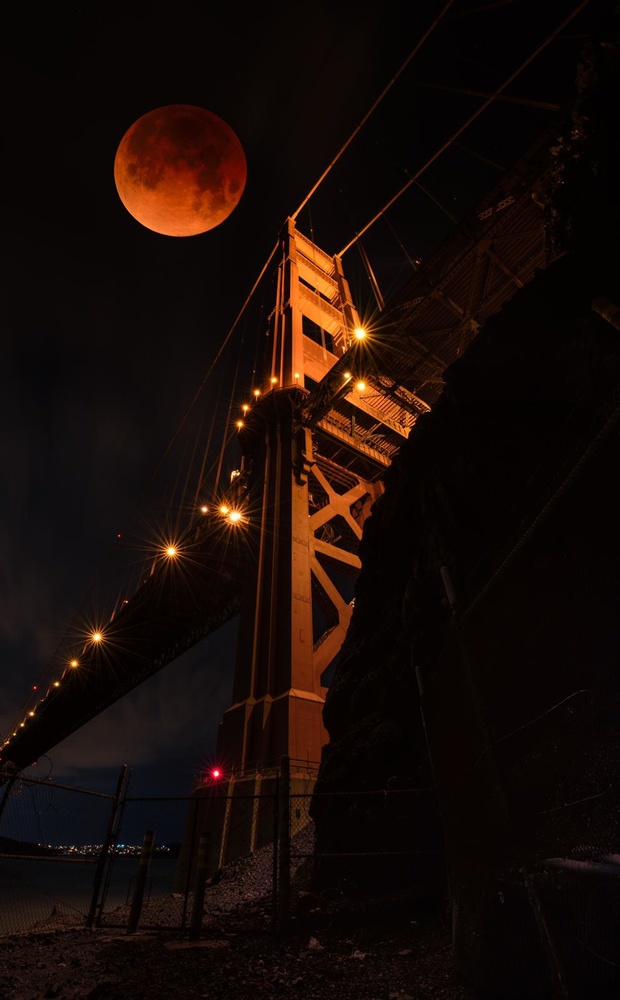 The shot in question.

Speaking to Fstoppers, Getty says photography helped him turn his life around after getting sober in 2008 and that he has not currently responded to the District’s letter, as he can’t afford an attorney: “It’s not like I have some thriving business. I’m an artist, and I live check to check.”

By his own admission, Getty has been cited for trespassing back in 2014, as well as stopped last December by a police officer who insisted he delete the images, which he declined. The District has threatened prosecution should Getty be found in the same area again. 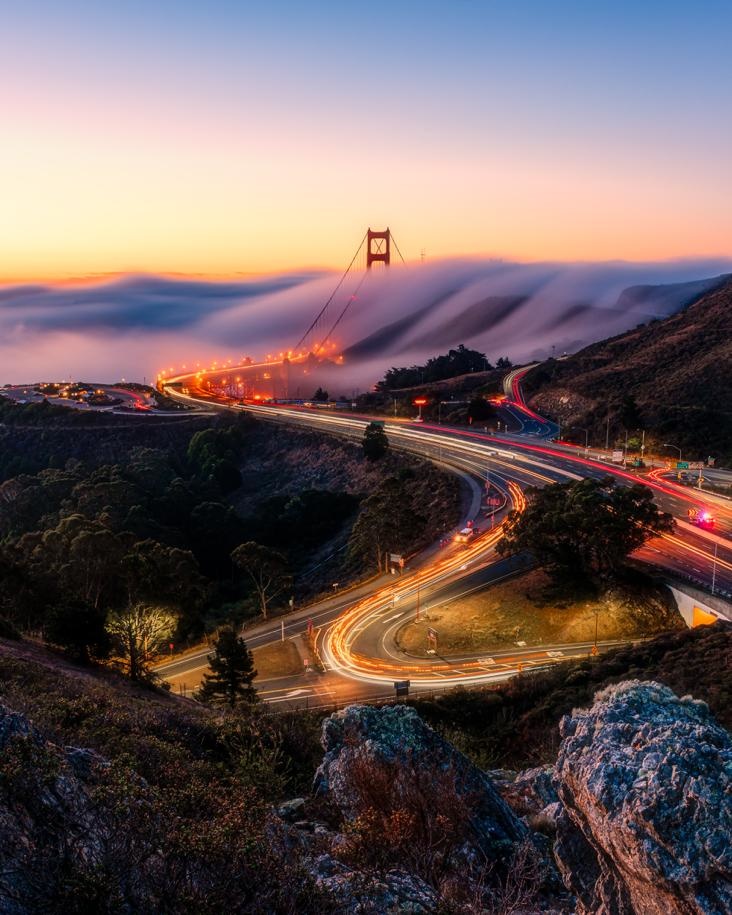 Images courtesy and with permission of Bruce Getty.

Featured Artists / May 15, 2019
An Electrifying Photo of the Golden Gate Bridge and the Story Behind It

I don't know what the rules or laws are about the photos that may have been taken while Getty was on GG property. I guess he could be given a ticket for trespassing using the photo as evidence but would they have a claim on the photo or profits from the photo? I really don't know.

But the cop telling him to delete the photos might be covered by the 4th amendment IIRC Mr. Smith's 11th grade government class. The cop can "ask" anything and the uninformed citizen may comply but many of the police know what they can legally demand so they will ask.

Man this is all over the place. First off, I am not a lawyer, so all my opinions are coming straight outta my ass, but I find it hard to believe that they can legally tell him to delete the photo. At best I can see him getting fined, but this stinks of a cop turning this into a pissing contest because he told someone to do something he wasn't legally allowed to tell them, and then getting pissed they wouldn't comply.

It's such a sticky situation because the fact remains that this guy broke the law. So on one side, he shouldn't be allowed to keep the photo because it was illegally taken. But on the other side, I don't think the government has a place to tell him to delete the photo.

Well they could just be trying to set a precedent to deter others from trespassing. I could imagine that growing into a problem for them if it were to go viral.

There are multiple signs stating a $10,000 fine or two years in prison for trespassing.

Some people don’t give a shit so they break the law despite 50 cameras pointed at that location.

We have to think of the implications of government having the authority to FORCE someone to delete a photograph for this reason. If I take a picture of a government official committing treason but I happen to be on property that is considered trespassing, will the government have the right to force me delete that photo?

Nothing in law allows a police officer to do that. Maybe they can sue civillaly, but even then, I doubt they could force destruction, just monetary compensation.

That's the issue. They can't do that....yet. But if by chance this is the outcome here, it does set a president for future cases.

Consider the bridge is a big economic target hence the restrictions around bridges like these since 911 and before that in this case. Then consider if you post a picture from a restricted area you maybe sharing what the authorities consider sensitive information on the bridges structure and the access to it.

Then they can advocate for a change to the law, not make it up as they go along.

I’m pretty sure sanctuary city laws allow you to do any misdemeanor crime without penalty!
San Francisco is a city that ignores crime right? The city is so well run that the police and public departments have unlimited free time.

Only if you are an illegal immigrant though. Regular citizens gotta follow dem rules!

Totally necessary to bring politics into it.

I agree about bringing politics into a photography forum; but, you gotta admit it's an excellent point!

I'd say he brought facts into it...

Congrats on bringing your stupid politics into this. Crawl back into your hole.

I’m pretty sure laws don't allow stealing from charitable foundations, stiffing contractor and setting up bogus learning institutions either. But, yet, here we are.

Or the highest ranking diplomat, the Secretary of State, storing and transmitting classified, even Top Secret, information on a private server located in her home, putting the nation's secrets at risk to avoid Freedom of Information Act requests that could be politically damaging.

And what exactly has this to do with the article? In this case is your corrupt government not responsible that this guy was trespassing.

or operating an illegal server in your home to conduct gov't business, weaponizing gov't agencies to target your political opponents, etc....but yet here we are.

The article is about law enforcement by government entities. The comparison to San Francisco's otherwise extraordinarily lax law enforcement, say, against public defacation, open air heroin use, and refusing to cooperate with the federal authorities to apprehend criminal illegal aliens, is perfectly relevant.

Your incessant, childish reference to hats and a has-been television comedy variety show, and the substance free ad hominem attacks made by your like minded compatriots demonstrate who the group devoid of intelligence is.

Your misuse of "Bernie Bros" as a username shows that you're not here to talk about photography.

Your eagerness to find any excuse not to address the substance of my comment, but rather, use my username as the focus of your attention demonstrates how fundamental intellectually dishonesty is the basis of your low character.

Seriously? You chose a pejorative political username, and then complain when someone mentions that fact?

Awww, precious downvoters. You can't dispute the reality of San Francisco's law enforcement situation, but the negative effects of the your ideology send you into a tantrum despite having no factual basis to disagree.

Just a callout for reading comprehension. The article clearly mentions that it's the Golden Gate Bridge District that is pushing the issue. Not the city of San Francisco. Consider it to be an 'alternative fact'.

You are conflating this with "sanctuary city." Obviously you don't understand the concept of the city not doing the feds job for them. Demanding that the city police also acts like federal police is the problem. The federal police mucks up local law enforcement. A sanctuary city sets its own rules.

I like Bruce's work. Trying not to be bias towards him, if someone took a photo that was obviously taken from within property I owned without my knowledge and consent, I'd be pretty pissed and want to make an example of them.
I hope this works out without any issues for him though. You can tell that no harm was intended.