A photographer in the United Kingdom has been ordered to pay a fine of more than $8,000 after posting a selfie to Instagram which proved that she had broken quarantine laws.

Carys Ingram who describes herself as a fashion, events, and wedding photographer had flown from Manchester, England to the island of Jersey. Upon arrival, she was then legally obliged to remain in quarantine until receiving a second negative test five days after her return. It emerged in court that Ingram had left her home repeatedly in order to go shopping and to a restaurant.

As reported by The Independent, Ingram posted a selfie to her Instagram of her trip to the El Tico restaurant in St Oen’s Bay. Authorities had attempted to contact Miss Ingram during her isolation but were not able to make contact, and the selfie was used as proof that she was ignoring quarantine regulations.

It later emerged that one of the passengers on the same flight as Ingram had tested positive for Covid-19.

Posted In:
Legal
News
Social Media
via:
The Independent
59 Comments

Photoshop / April 10, 2020
How to Keep Your Post-Production Skills on Point During Quarantine

Unfortunately, this is the world we live in nowadays. Look at any Tik Tok or Instagram influencer. It's a "look at me" society. And with numeric likes and thumbs-up, it's easy to quantify one's "look at me" score vs. others. Social Media prays on our most basic instincts, even if it means doing, rather stupid things, as illustrated in this article.

This is why the world can't have nice things right now....The shallow end of the pool is dragging us all under.

You're not kidding. These idiots really piss me off.

Yep- the 'look at me' generation. I'm sure she'll have an online campaign to have people help her pay for it.

Amen. It's non stop "look at how cool I am" and "how important I am". Do we really need to have you post your dessert?

Guilty of spreading the flu - until proven innocent.

If someone is so self centered that they have no regard for the safety of others during a Pandemic, they deserve all the shame we can heap on them. A million people dead from this in less than a year. It isn't the flu.

You're not a statistician are you? You're incorrect. That is actually a significant number. But very nice of you to be willing to sacrifice millions of people so you can continue to live your life normally.

Actuary would disagree with that. You don't understand what statistically significant is based on do you?

Statistical significance is the likelihood that the difference in conversion rates between a given variation and the baseline is not due to random chance.

Not really enough space here to try and briefly explain how percentages are statistically significant or not. Have you ever take a course of study in Statistics?

Let's stick with what chance you have of dying if you should happen to catch Covid, The CFR, Case Fatality Rate. By including the entire population you've entered irrelevant numbers into your equation since you also didn't address the infection rate of the population.

1.2 million is likely an undercount, due to developing countries lacking the same tracking capabilities as developed countries. Still, that works out to about 1 death per 6300 people globally, vs. the UK's which is about 1 in 1500: 4 times as high. And that is starting from zero, and with guidelines and restrictions like mask wearing and social distancing in place. Also, that's just deaths. A lot of covid patients have been left with long term medical issues and, over here in the US, 5 figure hospital bills.

I agree. Im a working Doctor from Germany. And while i dont like when people spread panic, just pretending it doesnt exist is even worse.
One thing a lot of people forget: The Flus death counts are usually estimates, in germany for instance 2018/2019 around 2500 confirmed cases died from the flu. The overall case number reports around 22.000 tho. Thats because the increase in mortality gets put together with the flu. We still lack these datapoints for covid as they will become available only after a few years. But the current death toll numbers, are confirmed cases only! So the actual resulting death count will most likely be a very good bit higher when its all said & done. And oh yeah, Flu isnt something minor either, but for it we DO have a decent vaccine to protect the sick and old. For covid we dont.

Makes me angry to see such a behaviour from the young lady just to feel important.

Y'all can try to pretend China is a good place with honesty and openness... But I'm not buying it, not for a moment. I figure they're underreporting by a factor of 10 at least. 10-20 Mil dead to date? Could be...

Yeah, at least in the US, people across the political spectrum just assume China is falsifying their numbers. It's hard to tell exactly by how much considering how tightly they control information, but I did find an article that estimated a factor of 10 based on urn sales.

Yes 1.2 is probably low and so is the total number infected. Lots of people show no symptoms at all so they were never tested.

It isn't the flu. Have you learnt nothing in the last 8 months?

Weekly deaths for the last 5 years from all causes in the UK. What do you think caused the huge red lump and what caused it to subside?

Implying CV-19 is flu is ignorant and idiotic.

You can of course argue about how to deal with the problem. It looks to me that the rule she was fined for breaking is likely stupid. As best I can tell Jersey is far from CV-19 free their government describes their status as

"Level 1 - Jersey is not yet free from the threat of COVID-19. In Level 1 our aim is to live safely with the virus." 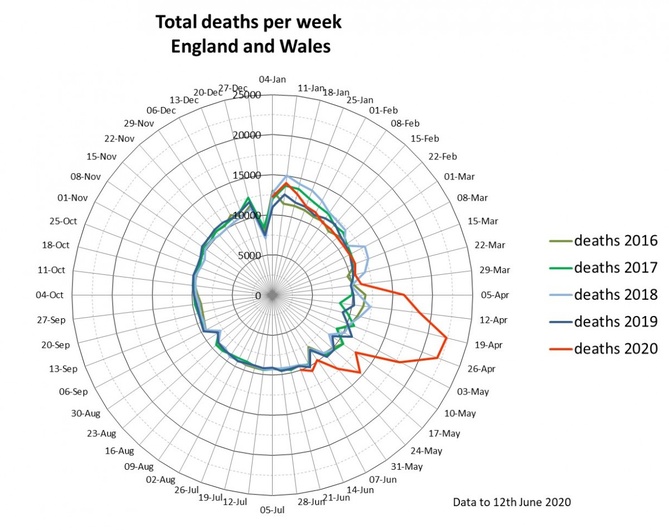 Note. If you going to something your not supposed to don't post it for the whole world to see. *Facepalm*
Ps. She's an idiot and deserves the fine. #covidmoron

Well deserved. The next virus may be even more dangerous and an entire generation needs to learn that this isn't a joke or some boomer nonsense.

I think the fine is excessive, make glad to live in the United States.

No the fine is not excessive. People are dying because idiots think they can do what they want. I'd have prescribed mandatory jail time. Money was an easy way out.

Depending on the outcome next week this country may go the way of the UK and the rest of Europe.

The point of the fine was to deter others from violating health ordinances by making an example of her. A lesser amount would have been less effective at achieving that deterrence.
Personally as an old timer who believes in Law and Order, I think it was just enough money to make the point. Hopefully she learns to grow up a little bit from this experience.

I never thought my comment would warmly be received and I believe in most law and ordered depending on how the law comes about. I not a fan of administrative policies that are created without an understanding of the situation becoming the law, simply to alleviate fear, then punishing people who get out of line. I am glad to be eleventh generation American, a veteran, and a medical photographer. It is my opinion that this pandemic does not respect your science, political leadership, laws, or fears. It is why you are seeing the political decision of what to do in the United States being pushed down the ladder to the local level.