Justin Bieber is currently being sued over posting a photograph of himself with Rich Wilkerson.

The photographer, Robert Barbera, has filed the lawsuit on the grounds of copyright infringement. The image in question, which has accrued the best part of 4 million likes, is reportedly an “unauthorized reproduction and public display” of Barbera’s photography and no attempt for licensing the image was ever made.

This isn’t the first time this has happened, with Jennifer Lopez and Kylie Jenner suffering similar fates. The subject is divisive every time it rears its head, and a cursory look at the current state of play with Barbera versus Bieber shows little difference. To most outside of the photography industry or arts, the thought of someone getting sued for posting an image of themselves on social media is absurd. Then, for photographers, the thought that someone can use your work without compensating you is infuriating.

Honestly, I’m not sure either camp has it completely right. Yes, using a photographer’s image without their permission is wrong, particularly in the case of someone who is using it to maintain public presence and persona to an unthinkably large audience. However, what blurs the lines for me is that Barbera is paparazzi in this scenario and took the image of Bieber without his permission. That makes me uncomfortable in siding uniformly with Barbera. This then opens Pandora’s Box with questions of usage over street photography of people.

Perhaps I’m too liberal and new-age with my stance, but the thought that someone can take a photograph of someone against their will, then use that subject’s fame to make money without their permission is murky territory. Companies are regularly stomped legally for using a famous person’s likeness on products or in advertising, and this doesn’t seem much of a stretch from that.

What are your thoughts? Is Barbera in the right? Did Bieber do anything wrong by posting the image? Am I a doe-eyed liberal apologist? Share in the comments below.

Opinion / March 16, 2019
A-Rod and J-Lo Engagement Photos Prove That Instagram Is for Voyeurs, Not Art Enthusiasts

The problem with this logic is that it provides a slippery slope for the infringement of other rights. If I take a photo of someone wearing a Mickey Mouse shirt, can Disney claim they can use the photo at will because they’re the subject ? You don’t think their expensive lawyers would make that argument until they win by outspending you ?

Photo belongs to the creator. It’s really not a hard system to understand.

I understand the need to protect copyright and the ownership of a photographers creative and professional images. I'm just saying for argument sake, trying to see it from the point of view of a person who is very clearly the subject of a photo, who has thousands of photos of them sold to publications around the world for the monetary gain of photographers and media, to then share a photo of their own image might not be grounds for a legal battle. Celebrities are a blurred line between being a human and being a brand, but it's still easy for anyone with a conscience and empathy to make that differentiation. Social media has changed the world where people can have their own personal public platform and outdated laws that discriminate against a persons ability to share a picture of themselves need to be looked at more closely, in a way that gives them more rights, without stripping them from photographers.

I don’t think it’d have been much of an issue if Bieber has shared the photo on a private account with friends and family.

But Instagram, especially for brands and public’s figures, and other social platforms are essentially commercial enterprises. Maintaining and updating them is done with the purpose or enhancing a brand and/ generating commerce.

Bieber used an image he didn’t own for a commercial purposes. That’s totally 100% grounds for a legal battle. Especially since Justin Bieber relies on being popular to sell his music and merchandise.

You're ignoring the fact that his Instagram has millions of followers. It's not Bieber sharing the photo with his mommy in a private email. By using Instagram with millions of followers, he published it very publicly and maintains that Instagram account for his own commercial benefit to maintain his marketability and its monetary value as a public celebrity.

Then campaign to have them changed - but accept the wider consequences and lack of control such a new law would have.

Time for you to take up politics so you can change the world from within...

You are welcome to use it personally. Just don’t display it publicly. 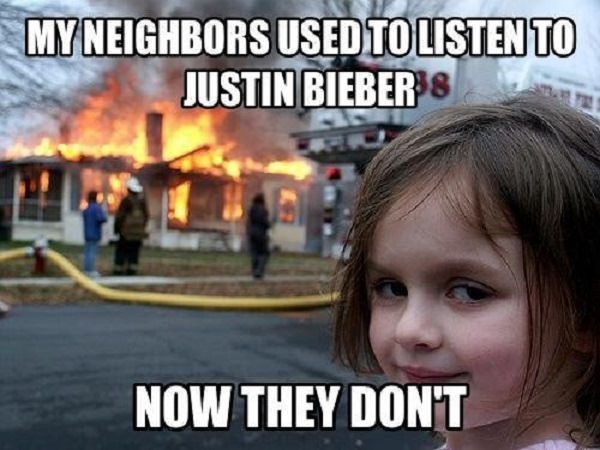 "However, what blurs the lines for me is that Barbera is paparazzi in this scenario and took the image of Bieber without his permission."

Then you're not a real photographer, let alone a real American when you refuse to understand the fact that there is ZERO EXPECTATION OF PRIVACY while you're in public!

Paparazzi, making money off shite pictures since the beginning of time. Don't call them photographers. They are stalkers with long lens and no talent trying to trigger celebs for pics they can sell.

Other people have the right to demand that photographers have zero right to privacy in public places either.

You are all missing an important distinction. It's usually fine to take photos in a public place, that much is clear. What is restricted is what you DO with them.

Editorial use is generally OK as long as it's not defamatory - ie this is a picture of Beiber getting out of a car. However, it's clearly not OK to use that same photo in an ad for, say, a jeans brand.

How you classify Beiber's use of the photo is the key point. I'd say it falls broadly into editorial use because it's not promoting a brand - but then again, Beiber IS a brand. So who knows.

The photographer is well within his rights, Beiber probably not - he should have asked first and should certainly have credited the photo properly - 4 million likes is not trivial and is worth something.

When he gets paid for every post, it is commercial.

Man even a site that caters to photographers is full of imbeciles who don’t understand basic copyright and laws pertaining to freedom of the press. It’s one thing to see all the mouth breathers on Facebook. Shocking to see them here.

It is much more shocking to see people who claim to be professionals but have no concept of ethics or courtesy.

"Yes, using a photographer’s image without their permission is wrong, particularly in the case of someone who is using it to maintain public presence and persona to an unthinkably large audience."

Please do the research before making such a ludicrous statement.

Can you sue a weasel? Any comment from the Canadian SPCA?

The photo vultures need to get a real job... its a joke profession.

When people stop buying the publications that use Pap photos then that might happen. In the meantime they are really just supplying a demand.

First Amendment: Freedom of the press. The photographer doesn't need to have biebs permission, for as long as the picture wasn't misused or mishandled that would lead to defamation of the person. On the other hand, biebs do need the photographer's permission to use it. If it's a re-tweet, its probably doesn't matter. But biebs posted it as if he (or his team/ crew) had taken the shot. In many ways, it would misled the 'credit' to the ownership of the photos. In short, it's stealing from someone's else's hardwork and made a gain on it.

If it's paparazzi then defamation is all they are about. Trying to photograph a celeb to look their worst or crazy in an effort to wreck their image (their business) for their own profit.

"but the thought that someone can take a photograph of someone against their will," I'm sorry, what?! Please indicate which part of this image suggests that it was taken against Beiber's will. Way to distort, I mean, report, a story.

Most of you should consciously take a look at the following fact:
"The right to one's own image is absolutely independent of where it is made." Point.
At home, on the street, underground, in space, wherever. Absolutely no difference. The right to one's own image is inviolable and no excuse in the world can change that.
You have to learn to respect the personality rights of other people.

Okay so you own the pic you take but are arrested for harassment and stalking. Show your cool pics of celebs looking annoyed at you to your cell mate.

The ignorance about photography in the US by the author is echoed in attorney Daniel's comments and his "fact".