Over the past week, Arkansas Senate has been working diligently to pass SB-79 - known as the Personal Rights Protection Act. While the bill is designed to protect the privacy and rights of the citizens within the state, it also effectively makes Street Photography illegal from viewing or taking in the state of Arkansas.

The bill's full name does a lot as to explaining the bill. Entitled “To Enact the Personal Rights Protection Act: and to Protect the Property Rights of an Individual to the Use of the Individual’s Name, Voice, Signature, and Likeness”, this bill is designed to take an individual's Rights of Publicity to an extreme, by allowing it illegal for them to be photographed or filmed on public grounds without a written consent.

As the ASMP (American Society of Media Photographers) explains --

The implications of this bill are staggering. For example, an image showing recognizable people posted to the Internet for a use that would not require written consent anywhere else in the world could leave you open to a lawsuit just because someone in Arkansas could view it online.

The ASMP is not the only ones who have came forward addressing this bill in the negative light. The PPA has also stepped forward, writing an open letter to Governor Hutchinson, stating that with the vague wording of the bill, SB-79 could potentially put thousands of photography studios out of business. The new bill would make it so release forms would need to be obtained from every guest at weddings and other events that may be photographed on a professional level. They have attached their open letter below --

The ASMP and others have banded together to get this bill dropped from Arkansas law. The bill must be vetoed by Tuesday to ensure it does not go into law. The ASMP has asked all photographers (not just photographers in Arkansas) to stand up and write Governor Asa Hutchinson and Arkansas Chief of Staff Michael Lamoureux encouraging them to drop the bill from Arkansas law. You can find more information as to how to write them by clicking here.

For the bill in its entirety, you can read it here.

As a result of the public outcry of Bill SB-79, Governor Asa Hutchinson has chosen to veto the bill in question. Along with his action of vetoing the bill, Gov. Hutchinson released the following statement --

In its current form, the bill unnecessarily restricts free expression and thus could have a chilling effect on freedom of speech and freedom of the press. In addition, SB79 exempts certain types of noncommercial speech while failing to exempt other forms of noncommercial speech. The absence of these exemptions could result in unnecessary litigation and suppress Arkansans who engage in artistic expression.

Posted In:
News
Other
Travel
66 Comments

Apps / February 4, 2019
The Five Most Useful Apps for Planning Photos

Well here is just another example how your civil rights are being bended day by day, slowly but steady and one day you will end up like a boiled frog in a pot - wiki explanation here: Boiling frog - Wikipedia, the free encyclopedia. Stand up for your rights, btw you have it in your constitution or am I wrong? Good luck guys, you will need it.

Thank you for this article, Zach. This bill, I believe, was introduced with good intention but is written far too broadly and could potentially be catastrophic to the photo industry in Arkansas as well as outside the state. Please take the time to read the bill and contact the appropriate parties with your concerns.

By protecting privacy and personnal rights, they are threaten both art and history. It's not just about photo industry, it's also about the ability to document the all-day life and the streets nowadays as a testimony of our time. They have to understand that street photography is not gossip.

Thanks to Henri Cartier Bresson and many others, we can see now how people lived in the 1950's.
And... well, it's in the land were the NSA is spying everyone's communications. That's a bad joke.

We can look forward to AK having no news channels :-), and Flickr, Instagram, 500px etc refusing to serve content there. Not I think what was intended

Yep. Things are going to get rough here Andrew. For future reference though...AK = Alaska. :) Now go send an email to the Governors office!

That said, I've heard Alaska is as desolate as they come...and probably doesn't have news channels.

Alaska is a lot more happening then a lot of places - lot of photo opptys for someone like yourself. A lot of culture and natural beauty to see as well as plenty of modern things in Anchorage-

Not true. There are many places in AK that are great even for street photography.

Certainly it increases the success rate when compared to the alternative of doing nothing.

News is specifically allowed per the law as fair use. Along with uses for political ads.

Not to mention, the Republican idiot is a musician. I think we aught to ban his music!

I've been to Arkansas. This is no loss. hehehe

Ok ok ok ok asshole comment aside, no really, this is BS.

Come on Nino!!!! I've read the bill. I do think it has good intention but the language is bad. Way too broad and too much to be left to interpretation.

Ehhhhh, I'm just being a jerk. I don't do street photography so I admit I am not terribly vested in these types of things. However, like any law in recent decades, there are dozens or even hundreds of details I certainly don't know about, so, I dunno just how rights-infringing this is, in reality.

Looks like my street photography career is over. Next thing you know it'll be illegal to LOOK at people in public.

How does this not go against the first amendment?

HOLY MOTHER OF GOD! THEY CAN SEIZE YOUR CAMERA GEAR AND GIVE IT TO THE SUBJECT OF THE PHOTO!!! LOL

18 (b) Upon finding a violation of this subchapter, the court may:
19 (1) Issue an injunction to prevent or restrain the unauthorized
20 commercial use of an individual’s name, voice, signature, photograph, or
21 likeness;

Let them try. They love the 2nd amendment there so much, wait until a photographer shoots back.

Curious why this was down voted ... it's written in black and white in the law.

Upon finding a violation of this subchapter, the court may:
...
(3)Seize the instrumentalities used in connection with the violation.
(c) An instrumentality seized under § 4-75-1008 may be:
(1) Awarded to the holder of the property right that was violated;

It was probably John Johnson Jr who did it, the local troll I guess.

After the Boston boomings the police used CCTV and peoples photographs to track the boomers. This seems like a bill that has not been thought through! It will do more harm that good.

Nope, law enforcement is allowed to photographer, so those cameras are okay.

I sure am glad I got to take this picture (in Harrison) Arkansas) this October before they passed that law. 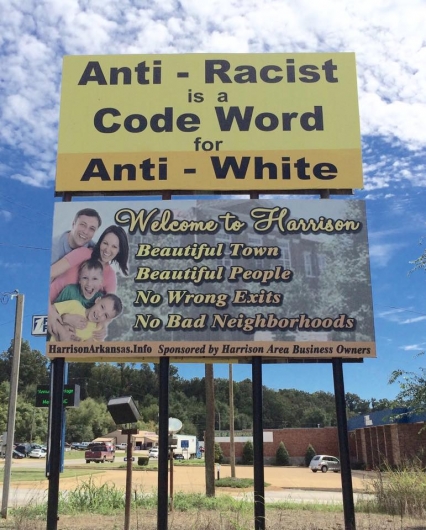 Republicans right? US is being run by idiots.

Yes Senator Jon Woods is a Republican, elected in 2006, started a Band called The Good Fight in 2006 with their music played on many reality shows on MTv and such.

I just sent him a message that if anyone in his state sues me because they saw one of my images on the internet, I will sue him in return, then deport his ass from MY nation.

And i tweeted him, hashtag #streetphotography

Thing is, republican senators are doing some of the most stupid things in the US. And the stuff they say...utter rubish!!
Anyway, here in Europe we can photograph all we want, there are rules for street photography, but as long as you play smart, there will be no problem.