Mark Joseph Solis, a student attending the University of Philippines, won a $1000 prize and round trip tickets to Chile and Brazil for his winning photo in the "Smiles for the World" competition. However, the photo is not his, he stole it right off Flickr. Further investigation has revealed that Solis has won numerous competitions over the last 3 years using other photos he never took, but rather stole from others online.

In addition to submitting the photo Solis came up with a story, city, even name for the boy in the photo. Of course it was all made up.

Here is Solis accepting the money and roundtrip tickets during an award ceremony with the stolen photo being displayed proudly behind him.

The competition took place on September 18th and the owner of the photo, Gregory John Smith, discovered the stolen photo after being tipped off by "emails from all over the world." He called it out in the comments of the news story covering the contest. 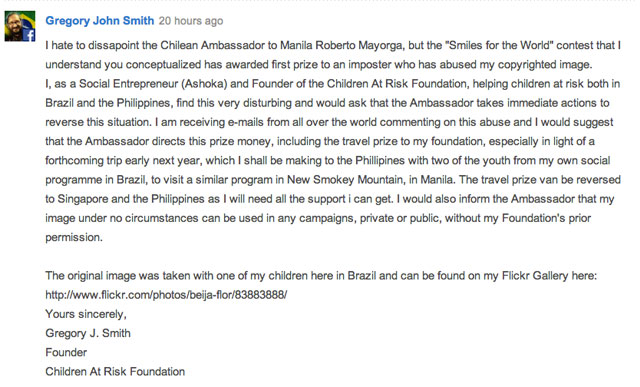 Smith's photo which Solis claimed to be his own can be seen here on Flickr.

After being caught Solis has been quick to apologize coming out publicly and even sending a letter today to Smith. But this is not his first time doing it. In fact, he used the same photo to win another contest, United Nations International Year of Water Photo Contest as you can see here on their website announcement (note the owner of the photo at the bottom). Here's another example of a photo he submitted to a contest in 2008, yet again stolen straight from Flickr. And again.

Solis sent a letter to Smith today to apologize for using the stolen photo to win the contest. 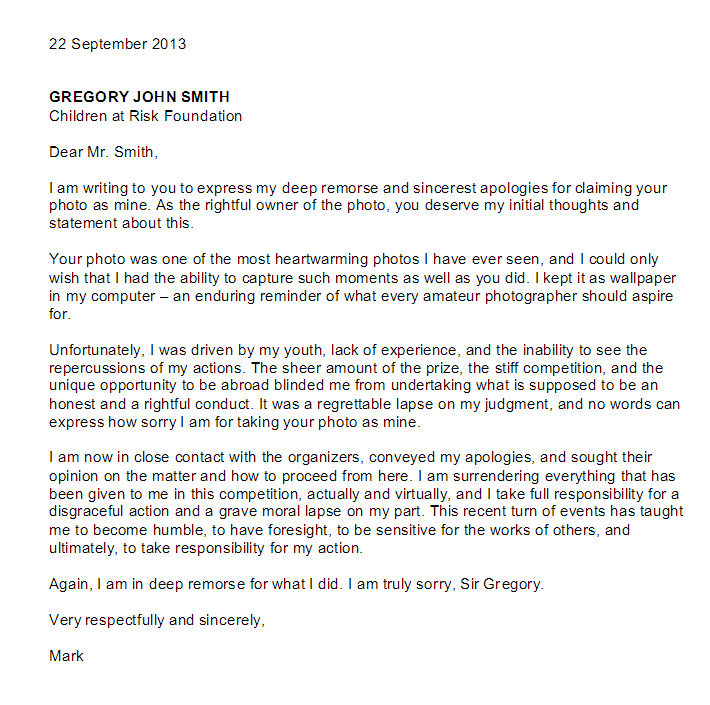 It is sickening to see how often Solis has stolen photos from others to submit them to contests. The ones highlighted above are just the ones that have been discovered. Makes you wonder how many other contests are out there that have entries from "photographers" that have been stolen? In fact, just a month ago Fstoppers shared the story of how a stolen photo won the Samsung Live in The Moment Photo Contest. Every time I read stories like this it frustrates me to think that people are actually ok with themselves when they steal someones work and present it as their own. I tried to reach out to Solis for any comment but his Twitter and Facebook page have been taken down.

youth and lack of experience have nothing to do with it.. a thief is a thief. No excuses.

Yes. It sucks that these people do the same things after coming across repeated stories of photo theft. They later end up giving excuses which does not make up for it at all.

He's a graduate student taking up public administration with hopes to be one day be a politician.... Imagine the corruption this kid will bring to an already corrupt government. He said he did it because of financial difficulties.. what a load of bull. A lot of students from the same University he came from are poverty stricken and have worked their way to pay for tuition and every day living.

I agree with u! For him to have done it on many occasions and to only feel remorseful now, imo, is a little too fake. I pity his mother though.

At least he apologized. It's not like it's fixing what he did, but this is something many others fail to do in situations like this. I hope that unlike Samsung - this time the prize will be transferred to the photographer who took that picture..

What is this, his 4th time stealing? Sounds like he will continue to steal when possible.

4th time stealing... that we know of.

He might just have simple template he writes out to these people. So disturbing to see.

I get the feeling he is very sorry.... sorry he got caught.

Yup... i hope it will teach him a lesson

noamgalai your missing the point the guy has stolen before so your comment about him apologizing is invalid..hes a thief and should be treated like one.get with the program mate!

Dont worry man, im with you on this. Just said that in many other cases they dont even try to apologize. It doesnt mean what he did is right

I think what people are trying to say is that even though he apologized, it was an empty apology. Its like a child that breaks something, says they are sorry, smirks and then goes and breaks something else again because they know all they have to do is say some quick words to make it ok.
If I steal from someone, say Im sorry, then go steal from someone else, does it make it ok because I said sorry? First time, it might be heartfelt but 4th time going in? Not a chance..
Hes not trying to apologize, hes trying to calm the situation down by sending a letter that hes sorry he got caught. He knew better from the first couple times he was caught cheating. Like someone else said, this may even be a form letter he sends to people.

I believe the Chilean embassy has stated that the prize can only be awarded to Filipino citizens, and thus the owner of the photo cannot receive it.

The second prize winner will be receiving the first prize award, and so on down the line.

Maybe they should get him on the judging panel...seems like he can pick a photo that will win competitions...I've still got no idea...

same thought as my sister &amp; me :)
The guy may be a thief but his eyes does not lie.
If only that eye was gifted to some pure soul instead...

Sorry to have been caught more likely. As it's the fourth time he's done this I have a bit of trouble believing in his 'deep remorse'.

It's not that pathetic dude who makes me sick, it's the lax rules of assessing whether a contribution is genuine or not.
I was in the belief that adding the RAW image was mandatory on such photo contests ???
Therefore I think it's more appropriate to give the jury a serious scolding on their wanton carelessness.

He's a thief, but you believe his bio??

Hahaha-You're not that literal minded are you? How the L do you misunderstand my post? What-I have to make a smiley face for you? write "SARCASM"? :-)

Just as previously mentioned, any price awarded picture needs to be verified by its raw file. No problem there.

I pass the buck to the judges who hand out prize money all too easy.
It takes all of five minutes of comparing the first 3 places with their raw files, but saves tons of emarassement.

Comparing RAW files is an almost fool proof way, but cases like this are incredibly easy to check. Dragging this photo to the Google images search field reveals its true owner in a matter of seconds. You are right, the contest administrators did not even put in the minimal effort to verify ownership.

The contest administrators might not be that tech savvy and that may be what people like mark solis are counting on.

Then they should hire someone, like a sixteen year old. Or... you know... not run a photo contest if they can't insure fair play.

I think where this method fails though is that not all images are shot in raw. While I find it unlikely that this photo could have been made as is with a camera in JPG mode it isn't conceivable to imagine that many other potentially winning images could be.