Adding the Human Element to Landscapes

Let's be honest, landscape photography is just fun no matter where in the world you are shooting. I would even venture to say that it is growing with more and more popularity over time and with increased exposure from social media outlets.

For those of us who chase after that perfect shot which combines the best parts of nature into one single image, I think it is safe to say few things are as satisfying as having all the elements come together to get that perfectly clean shot. At this point, I have lost track of the amount of times I have waited for minutes, even hours for my scene to clear of people just to get that perfectly printable shot. But there came a point where I began to realize that there really were some significant benefits for actually having someone in the frame. Some times I would set up the camera and wait to see what spontaneously happened with other hikers and nature enthusiasts around me, and there are other times when I have point blank walked up to someone and asked if they would randomly be willing to stand in front of the camera for me. 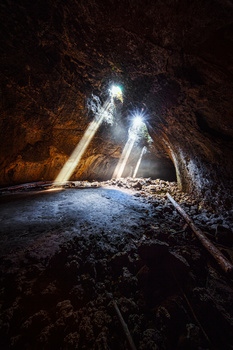 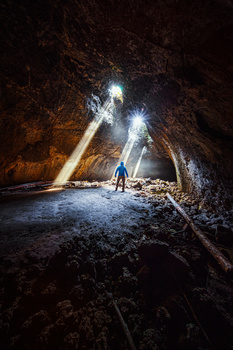 Point of fact, the latter situation is precisely how the image used in this article came to be. There were other photographers in the cave, coming from all different places, there to enjoy the exact same views. I simply approached one of them and asked if they would be willing to step into the frame for me. I didn't need anything crazy, I just wanted the image to tell a little bit more of a story, rather than merely an interesting view of one of the many features of this planet. I think that is the thing that is most fascinating about whether or not to include a person in your shot; the idea that having someone in the frame actually tells a little bit more of the story.

I really am curious to hear what you all think about this, but I think I have the reasons why or why not to include a human element in the frame narrowed down to two basic ideas. I think that shots of the landscapes themselves are ones that have a higher likelihood of being printed and hung up on someone's wall. But I think that the shots that include that human element will be inherently more relatable to those who view it and are likely to garner more attention in whichever platform you decide to share your works. There's just something about having a person there to both give a sense of scale to the image while simultaneously giving viewers a chance to picture themselves there in the frame, to imagine what it would really be like if they were to step into your image. It results in a different emotional connection with the viewer, one where the imagination is sparked a bit more than if the image were only of the landscape. What do you think?

Landscapes / April 29, 2018
Looking for Meaningful Landscape Photography in the Arctic

Yes, I have noticed beautiful scenery seems to have more of a story with the human element. For one with what your subject is wearing, I can now infer something about the location's temperature giving the photo that extra level of connection.

Those caves were awesome!

I owned five photo labs in Banff National Park back in the day (when photo labs were a thing and I was a wealthy man). In spite of the magnificence of the Canadian Rockies, most of the prints we processed had people in them. We are naturally drawn to the human image and it always creates a focal point as well as context and scale.

I think for this subject the person definitly adds to the final result - as you say it helps the viewer to imagine himself standing there and it also gives an impression of scale. Showing the connection between a person and the surrounding nature can improve a scene, but it can also easily be overused.

Since I'm often not 100% sure, if in the end I need the person in the frame or not I also take separate pictures like you did. For print, for example, I will often use the photo without the person. For social media the photo with the person usually gains more attraction ;-)

You don't yell at them to get out of the frame? 🤣