You've heard it before, there's no doubt: the creative gap — that picture you have in your head of what you want a shot to look like and what you come up with in the end. As kids we're completely fine with this, we can always just draw or make something else 10 seconds later, but as adults we often get crippled with the fear of rejection.

In the beginning the gap is probably as big as the Grand Canyon and that's fine. However, as you get further along in your career the gap closes, becoming smaller and smaller — yet, the increments at which it closes suddenly are tiny and few and far between. Years can pass before you feel like you've made an inch of progress. There's no denying this can be a maddening process and is probably why you can recall every single moment you contemplated putting all your gear on Craigslist and calling it a day. Think of how many fellow artists struggle with depression due to the very nature of this disconnect between what you dream up and what you actually produce.

Take for instance the following two images. Now, while there are four to five years between the two images, the first isn't necessarily a bad image per se. It's well lit and even was shot for a publication. However, the image and its style wasn't what I envisioned myself shooting when I first started out. I wanted to do more fashion/editorial work with agency models, yet at that point in my career I didn't have the right connections to make a shoot like that possible. The "after" photo is one that while not the peak of my artistic career, it's definitely starting to close the gap on the kind of work I want to and know I can do. 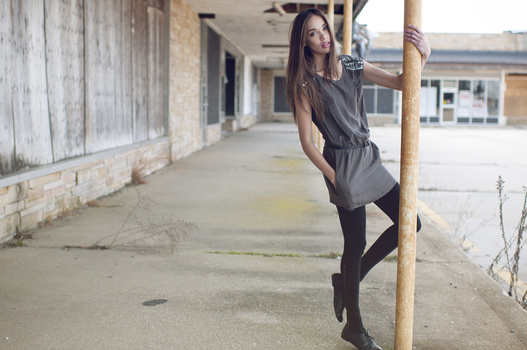 But here's the most important thing to remember: Just keep going

There's this sinking pit in your stomach feeling when we finally finish a piece of work, whether it's a series of images, a 62 hour digital manipulation, or a novel where we think it's shit and just hope somebody will like it and appreciate it. Now, here's the next thing you have to do: pat yourself on the back and walk away. Don't worry about how much better it could have been or try to just tweak it a little bit more to get it perfect, because all you'll do is make it worse for both yourself and the piece of work.

You have to remember that you're always going to be better than your last piece of work, so just strive to keep building on that principle. Keep shooting, writing, blogging, painting, drawing, or whatever because eventually you'll look back and see a long, victorious body of work called a career — something you wouldn't of had if you keep fussing over getting that one piece perfect when it went out the door. Companies sometimes are guilty of this and you know what happens? They keep attempting to get something perfect, only to realize they've been working in a vacuum. The window of opportunity has passed them by and someone else has beat them to market; they're dead in the water. All that capital, man hours, blood, sweat, and tears all for nothing, yet all they had to do was get the product up in front of people's faces, get invaluable feedback, and work on an update to push to production. Some entrepreneurs forget that part, when you work on something so long and so hard you don't think to stop and see if you're going in the right direction with what your target market wants and is looking for. Instead you just work yourself to death simply trying to put what's in your head on paper.

Everyone is guilty of this

I can honestly say I've been guilty of this in my creative life quite a bit. There's been shoots I had planned out in my head and then self-sabotage because I don't think I can produce exactly what I envisioned, and I'd let everyone down who's involved in the process. Now that's a lot of fear, pressure, and disappointment to convey before I've even made one phone call or sent one email to start pulling together a team, made a storyboard to share, or taken an actual photo. I can laugh talking about it now because we all realize how silly it sounds, but you also know how deep that rabbit hole can go. The creative gap can paralyze some artists, for years even, and for some others make them quit making art all together.

In an attempt to force myself to be better, I finally made good on an idea I had been outlining in my head for the better part of a year. I started a podcast about what it's like to be a creative called "The Angry Millennial," and if you have ever heard me talk about my struggles to find work after college and grad school you'd really get the name. Now, while my first few episodes may not be as good as I'd like I know that with each one we do it will only get better and the quality will increase gradually. I've had to deal with the fact that I'm starting out in something all over again, learning new programs to edit and cut audio, proper settings for files, microphones, and recorders and tons more that come with breaking out into an entirely new venture. Yet, I've been finding a new focus as this rewarding beyond belief and it's been making me more confident with who we approach to have on, ideas for episodes, and even photos I suddenly find myself wanting to take. We've even been lucky enough to have recent guests like Jeremy Cowart, Renee Robyn, Bella Kotak and some familiar faces like Doug Sonders, Zach Sutton, & Pratik Naik.

At the end of the day, it's most important to remember we're always going to suck artistically to a degree, but the only way to get better is by continuing to start, complete, and move on from a single piece of work then repeat. It's the harsh truth we all know and have to accept over time. Not everything you make will be amazing, but you have to just keep going. After a while, who knows what you may have built in the process.

But don't just take my word for it, how about something from the great minds like Chase Jarvis and James Victore talking about an episode of Creativelive dealing with the very same issue, the chase of perfection:

Jose Rosado is an editorial photographer/writer + host of The Angry Millennial Show based out of Baltimore with a love for cycling, his kids, and of course the Philadelphia Eagles.

Gear / August 3, 2020
Suggestions for Buying Used Gear: Where and How to Buy

Jose, very good article. Yes, this gap is somewhat terrifying. Thing is, i do believe that if we put our best efforts into something and are capable of learning with it, even if it is small, it is good.

Thanks Paulo, it can be daunting for sure. Especially the fact that it really never goes away, your bar and taste just gets more refined. But like you said, any progress should be celebrated because the best thing you can do is just set out to be better than you were yesterday.

Thanks, Stephen, glad you liked it! And funny way of meeting on FB too ;)

Thanks, Tomaz! Glad you enjoyed it.

Keep it up, this is inspiring for all photographers doing what they love in moments of debate.

Thanks Stephen, glad to hear it helps!