Here I Am: The Story of Tim Hetherington, War Photographer

Tim Hetherington, without a doubt stands high among the elite of war photographers.

There is no way that one can possibly encompass the magnitude of an individual within the pages of a single book. Alan Huffman makes that attempt with his biography Here I am: The Story of Tim Hethergington, War Photographer.

Tim Hetherington's life was cut short after being injured from a mortar blast while covering the Libyan Civil War between Gaddafi troops and the rebels in Misrata. In his book, Alan Huffman tells Hetherington’s story along his career milestones through prize winning portraits of Liberian children to the celebrated portraits of U.S. soldiers sleeping in Afghanistan. Here I Am describes not only his work within the conflicting areas, but also the humanitarian side. It is easy to focus on Hetherington as a camera wielding conflict photographer, it's is quite another to show how he took horrible situations and lifted them higher to raise awareness across the globe.

Hetherington’s dedication was not only in photographing the state of unrest in the countries he was in, but also how he shined humanitarian light onto the issues unfolding all around him. A lot of photojournalist and writers might rush out of the way once their job is wrapped, Hetherington would stick around and continue to help the affected areas. After the civil war was over in Liberia, West Africa, Hetherington lived there for three more years helping the United Nations track down human rights criminals.

The book focuses on the career of Hetherington as a war photographer, but what stands out aside from the stories of war are the stories about his true character as a human being. With each position in the globe Hetherington touched lives from his presence in the war torn towns and countries. The stories are anything short of amazing how he helped the local people in all of the areas who were affected by the horrible things happening around them through his camera. This book attempts to wrap up the later life of Tim Hetherington and his conflict coverage, I don't think one book or one author could possibly fit any human's story into those parameters (just like this post attempting to write about this book), but Huffman did a great job with his writing. I would highly, highly recommend reading this even if they are not in our field.

Tim Hethergington's life work is quite astounding. His film Restrepo, which was co-filmed with Sebastian Junger, was nominated for an Oscar back in 2011. His footage has been featured in The Devil Came On Horseback and Liberia: The Uncivil War. He is the recipient of four World Press Photo awards including the World Press Photo of the Year in 2007 and an Alfred I. duPont Award in broadcast journalism while on assignment with Sebastian Junger for ABC News in 2009. HBO recently released Which Way To The Front Line From Here, and is a wonderful look at the story of Tim Hetherington and should be watched. 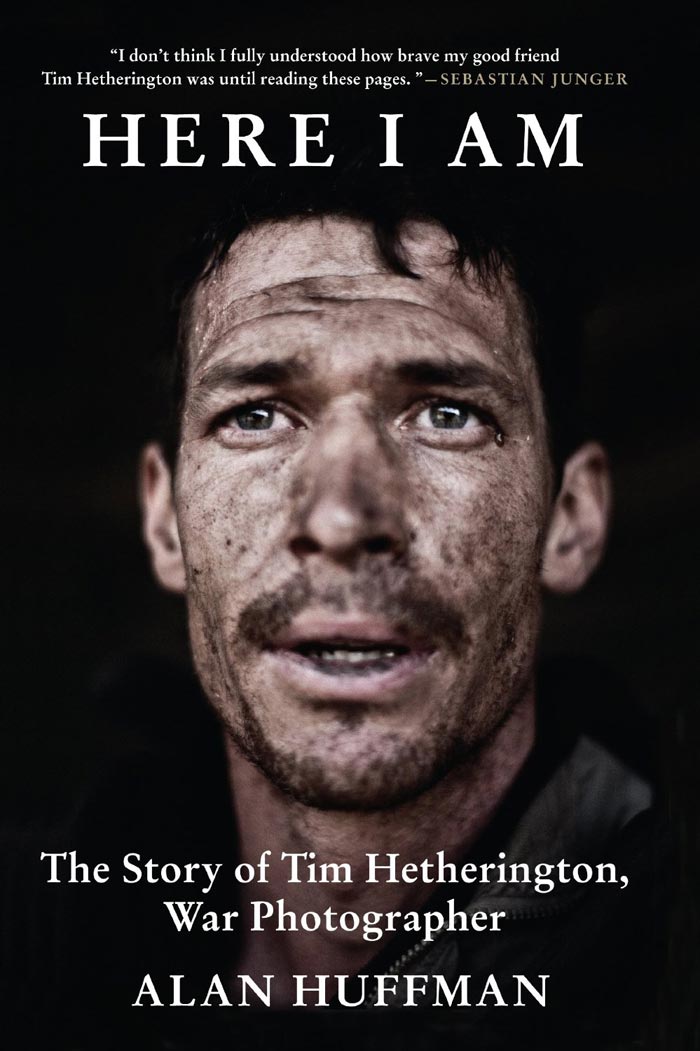 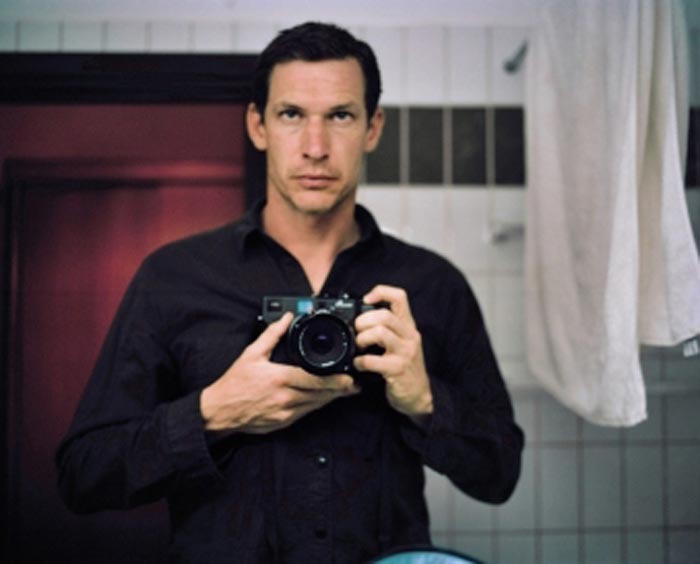 To find out more about Tim Hetherington and the amazing work visit timhetherington.com, Hetherington's IMDB page

Some of the praises for Here I Am: The Story of Tim Hetherington, War Photographer

“I don’t think I fully understood how brave my good friend Tim Hetherington was until reading these pages. Not only does Huffman bring Tim back to life  his brilliant work, his extraordinary vision  but he also leads us through some of the most harrowing combat of our generation. His description of the siege of Misrata should be read by anyone who imagines they understand war  or courage, or fear. For all my time as a war reporter, I don't think I fully understood those things until reading Huffman's incredible book.”—Sebastian Junger

“[Huffman] investigates not only the significant life of his subject, whom he admires greatly, but also the craft of the war photographer and the tensions and contradictions involved . . . Huffman excels at heightening the drama, depicting the rapid-fire action and constant danger of working among soldiers and guerrillas engaged in battle.”—The Boston Globe

“Huffman looks at what it means to be a war reporter in the 21st century through the lens of the iconic Hetherington’s life, looking at his early work—prize-winning photographs of Liberian children—to his Oscar-nominated documentary “Restrepo” . . . to the mortar blast in Libya that cut his life short.”—New York Post (Required Reading)

“[Here I Am] captures the unflinching life of war photographer Tim Hetherington. . . . Huffman re-creates the suspense of battle, the tension between competing photographers who, by nature, are judgmental of one another’s approach to depicting war; he builds detailed characters of Libyan ambulance drivers, fighters, and commanders as successfully as he depicts the contentious clique of photographers.”—Lynsey Addario, Daily Beast

“Huffman vividly chronicles the short life of a man drawn to danger zones to capture the horrors of modern warfare.”—Los Angeles Times

“A powerfully written biography . . . titled Here I Am in reference to a moment that Hetherington finds himself in his own viewfinder, reflected back in a mirror. This is poignant imagery and metaphor for the entire body of this extraordinary artist and humanist’s life.”—Huffington Post

Purchased. And, +1 on Restrepo.

What in the world do we say? SHOULD we say?

Fantastic that you're giving this coverage. I loved the book. I've loved Tim's work, but even more his philosophy as being not a photographer perse, but someone who looked for means for social change.

I had to put the book down frequently though, because it was so heavy.

I'd very much recommend watching the HBO documentary that just came out as well. Tim was one of those bright lights shining into the darkest corners so that everyone could see and both do well to remind us of that.

I watched the HBO documentary before reading this book and by doing so it laid a great amount of ground work that the book went back and filled in as a reader. You are right there is quite a bit of heavy subjects, especially with the war ravaged children from Africa and the things that people go through when conflict hits their homeland.

It's interesting. I was surprised that the two didn't mesh well together, in my opinion. On their own, they were great, but I don't know that I could have watched the documentary first and had such a visceral image painted of Liberia as I did when reading. But then again, Libya was not the experience I imagined when I saw it in film.

Still, both worth ingesting. That being said, I can't get enough of documentary photojournalism, reportage, and conflict work, so I'm biased. It really puts into perspective the things that we take for granted.

If you read this book and think about what they say about the "theatrics" of war, then look at the protests in Turkey, you'll have a great appreciation for the way history repeats itself. But... I digress.

The Devil Came On Horseback was something that I watched before the HBO doc and book were read, it reflects the same things happening in Africa that Tim and Brabazon were covering so that helped pad the reading. Highly recommend that as well, its on Netflix I believe. On top of all of this HBO ran another phenomenal series "Witness" awhile back which touched base on Libya in one of the parts adding to the visuals that popped out when reading.

Everything from The Devil Came On Horseback, all 4 the Witness series, The Lost Boys Of Sudan and Which Way To The Front Line have melded together to support what is going on in this crazy world we live in. If people have the time I would def check them all out.

You're right on Witness. You can now buy all the Witness DVDs as a box set from HBO. Fantastic coverage. All of the photographers featured are great but Eros Hoagland is just... mind-blowing his devotion to his subject matter.

And yes, Witness Libya shows footage from the hospital where Tim died. It... kind of left me shaken because I didn't expect it.

The Devil Came On Horseback was a book (and film) that transformed my personal views on photography. Coming from a graphics design background, I thought photography fell on the more frivolous and pretentious end of the visual spectrum. What I learned from Brain Stedile was that a photographer can bear witness to a situation, and bring back irrefutable, undeniable proof as to what really happens in the world. The viewer can - and often will - chose to ignore the issue, but they can no longer claim ignorance.

I will have to read The Devil Came On Horseback book now, thanks for sharing.

What makes The Devil Came on Horseback interesting is that the author spends a good chunk of the book talking about how hard it was to drum up any kind of response or even sympathy when he came back home. I wonder if we have become numb as a culture to images of conflict.

i didnt expect i saw your writing here mark