A Project Every Serious Photographer Should Complete

I thought I'd never understand this one photo series I saw over a decade ago; it was so popular but seemed so bland to me. What I realize now is the content of images aren't the most interesting part and in fact, the project has a lesson all photographers could learn from.

The year was some time in the Naughties, I had just bought a second-hand DSLR and was marauding from place to place with it obscuring 40% of my face 100% of the time. I don't just like things, I get a call from the void and throw myself in, neglecting all other areas of my life, and photography was exactly the same. I was reading, watching, and listening to everything I could get my hands on. I wanted to know what made the top photographers great. It was then I came across Bernd and Hilla Becher's "Water Towers (Wassertürme)" series. As the name implies, it's a project where they photographed industrial architecture ranging from water towers and silos to grain elevators and pithead gears all around Europe and North America. Each shot was in black and white — more sepia — and presented in banks of prints all the same dimension. It was and still is much coveted and can be seen in the Tate and Guggenheim (click either of these links to view as I don't want to infringe on any copyright) and has won many awards.

Try as I might, I didn't "get it". It felt like modern art that was in vogue to swoon over, but its genuine merit to the population at large was somewhere between lost and a meme. Then, some years later, I realized what was so impressive — to me at least — about this series: consistency. These images were taken in places thousands of miles apart, on different days, weeks, and even months, and yet there is a very obvious strand running through all of them. Think how difficult that must be to create. You have to have the same angle, the subject take up roughly the same amount of the frame, same composition, same editing, and same light... that's right, the sky is almost identical in every image. For me this swiftly went from a strange but mildly interesting industrial architecture record, to a seriously impressive artistic feat.

Suddenly, the more I looked, the more consistency I saw in top photographers. The results didn't even really matter (though they're always good), what mattered was being able to create multiple images in multiple locations, at different times, and yet it be clear to any viewer that the images are all "connected"; that is that they are all from the same photographer for the same project. It's significantly more difficult than it sounds and requires a harmony between photographer, equipment, and vision that is hard-earned. Martin Schoeller's headshots are a perfect example. He does a lot of his headshots with different backgrounds, in different locations, and with vastly different subjects, but you know they're his. They have something that links them all together. In actuality that "something" is a mixture of many things. Are they the best headshots you can get? No. They're not always even very flattering. But consistency is something that's rare, particularly at that level and number of repetitions. 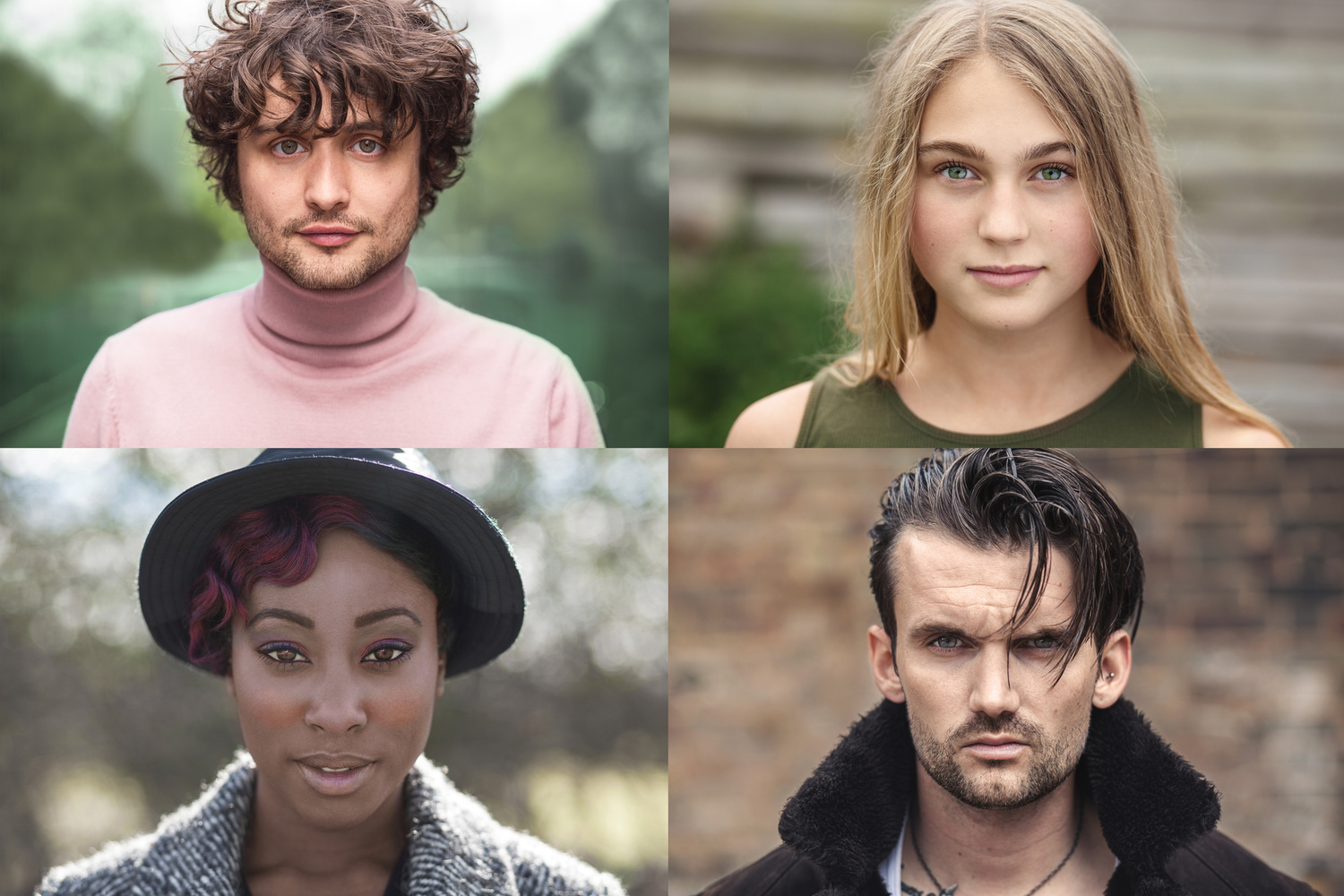 4 images from my RKB Headshot series.

I wanted to try to create my own style of headshot which was — unintentionally and only in retrospect am I realizing this — a blend of the two aforementioned series: headshots in the same style every time, but naturally lit with varying backgrounds. I don't believe for a second that they're the best headshots in the world, in fact, I usually take lots of different styles of headshot because people and their needs vary and they often aren't even my favorite shot of the day! However, I regularly get asked to take one of these. Perhaps there's a comfort in knowing exactly what you're going to get. There's commercial value in producing a certain type of image over and over; it sets a standard of work that alleviates the potential client's fears of disappointment. I do this time and time again even in non-portrait commercial work.

So, the project I think all photographers ought to conduct is this: create a series of images that are obviously part of the same set despite being shot at different times and locations.

Gear / January 30, 2020
Those of Us at the Dawn of Digital Screwed Up a Generation of Photos

This reminds me of a "rule" in economics to avoid competition especially for small to medium companies and self-employed persons: that is to deeply specialize and build up a very small niche.

I agree. The book "Oversubscribed" by Daniel Priestley is essentially on that concept.

You know what I like most about this. You didn't feel the need to tell us which camera, lens, settings, etc, etc you used.

Well, that and the idea you put out there.
I did a few photo series many years ago when I had time for things. Now, sadly, I don't have the time or make the time.
I should, yes. Will I ? I don't know. My Plan B, or exit plan is sucking time and I'm enjoying that time away from the camera. Not to mention a 2 year old daughter that I'm loving to be with.

Sounds like the series needs to be of your 2 year old!

Oh, she's got a library of photos to look back on already ;)

I've been participating in the 100 Strangers project: https://www.flickr.com/groups/100strangers/ for just over a year. I'm on number 15, so slowly to be sure. It has been immensely useful.

Ooh that's a great idea. I saw a German photographer do one when I first started out and had always wanted to do a stranger portrait series. Good work!

I do the same project, it is a fantastic and worthwhile project to do. I am on Stranger 170 ish and have learnt so much by doing this. I recommend anyone who is into portraiture to have a go.

Hey Robert -- I agree with the process/project and believe it can help any photographer think more critically and grow, rather than chasing aimless goals. I want to add one more thing to your headshot project that I think brings a lot more significance that you are overlooking and may be of virtue to young aspiring photographers: the story.

If you were to present to me just the 4 headshots you have above and ask me for feedback I would give you feedback on those headshots alone. But because you have the accompanying blog post, there is more significance to what you are achieving.

I admit I am very late to the blogging/story telling game and need to get myself wrapped around that to create more cohesion with my work. But often times it sets apart the artists from the button pushers, and what also leads to bigger projects/assignments/opportunities that may be often overlooked.

Such an important point. I don't want to dilute this article with more information, plus it's a little text heavy as it is, but I couldn't agree more. Story can completely transform an image or series.

I understand. And if you don't already, I believe you would make great vlogs talking about what you are posting in these articles. I think Jonathan Lee Martin is producing some fantastic video content for Fstoppers, and not to add another load to your already fantastic pieces, but that may help you in the wordy pieces.

Are you also including these articles on your website? Maybe an extended article on your own personal website with a link to it from your Fstoppers articles may help, and increase traffic to your site.

Screw it, I am going to just go to your website and answer my question for myself, haha!

I am going to try this series at least for a few months. I think we all struggle at some point in time with being consistent.

Hey Robert, thanks for articulating so concisely a key concept in good professional work.
Of all the comments I've received by editors and art directors about my work over the years, the one that is most common is consistency. "...we can always count on you to deliver a look that we like".
And it makes sense. we goto our fav coffee shop because we know what we are going to get. Same goes for our kit. We know know how this camera brand will preform. etc.
Clients are the same. They go with what they know will work.
Just like your articles, I know that they will be consistently good and this one is no exception.
Thanks for sharing it with us.

I was just looking for a new personal project, time to get planning

I will try, but even shooting the same person, myself, in the same location, my studio, is a challenge. I will try to move around.

Very good point. It's not easy to create your own style which you need to maintain. Even in IG there are amazing photographers/legends with 3k followers and at the same time pretty decent shooters with a consistent style posting for 300k+ fans. Thanks, Robert for your post.