Time to Say Goodbye to Instagram and Hello to Dayflash

Let's really be honest here, Facebook and Instagram have changed the rules enough times now that it's driven most of the fun out of the social media platforms and it's long been time for a change. Instagram used to be great for photographers but has since become an almost pointless endeavor for anyone that doesn't already have 100,000 followers or more.

We could probably speculate for hours as to the reasons behind many of the changes that the Facebook overlords have made to both platforms, but the reality is that neither Facebook or Instagram is a very business-friendly (or photographer-friendly) environment anymore. At the start, business profiles on Instagram seemed like a great idea and came with lots of supposedly neat tools and analytics for businesses. But now the algorithms seem to be skewed against those working hard to cultivate a solid, reactive audience. This topic seems to come up often enough, both in social media circles, here on Fstoppers, and even us as Fstoppers Staff have been discussing the merits of using Instagram anymore because it feels like engagement across the board is dropping off for most people that aren't willing to fork over massive amounts of money to Facebook. 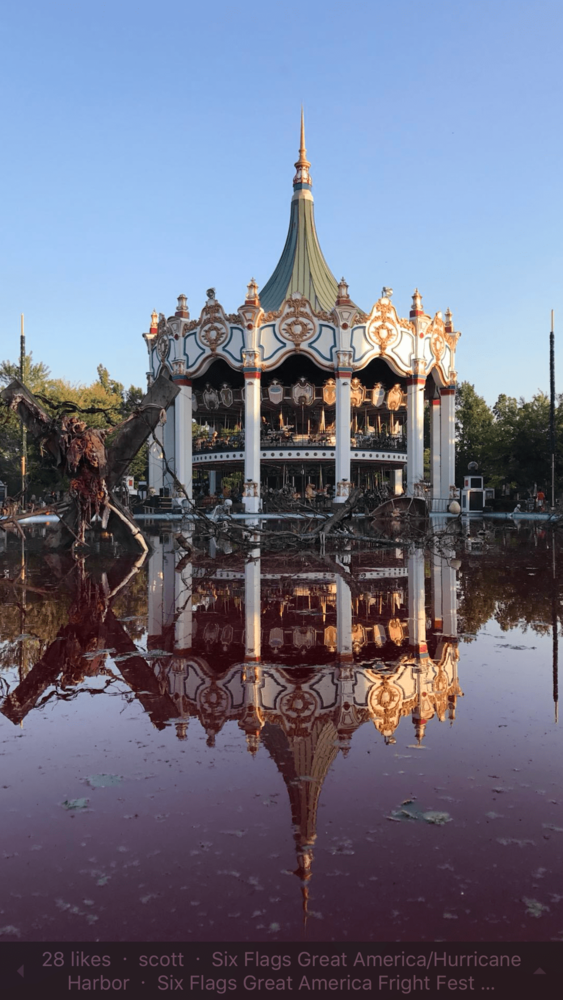 A sample screenshot of how images are viewed within the app. Images are displayed full screen, with the option of tapping to pull up image and author information as well as any comments on the image.

Realistically, Instagram has every right to engineer their app however they want, but it's impossible to deny that the user experience just isn't what it used to be. The number of sponsored posts is rocketing up and the number of engagements from actual fans is dropping dramatically as users are pushed to sponsor more and more of their own posts just so people will see them. The frustration that many users feel towards Instagram is precisely the reason why Dayflash came into being. They have built a social media experience that encourages users to share and engage freely without worrying about having to convert profiles to 'business' profiles or sponsor their own posts.

In a nutshell, Dayflash is a place where shared photos and videos take the spotlight, literally, since each post is designed to be seen full screen. It's not about promotion or paid engagement as neither followers or post engagements can be bought. The only way images make their way into public popularity is simply by producing and sharing high quality and visually engaging imagery. Dayflash sent me an invitation to join back when they were first launching and I've been a user ever since. Gaining a following is done through hard work and consistency, the way it used to work on Instagram back when Instagram was fun.

At this point in my career and social media presence, I can honestly say that I spend more time on Dayflash than I do on Instagram. I am tired of trying to cultivate an audience within the Facebook realm and I really appreciate the simplicity of the user experience on Dayflash. At some point, I will probably drop my Instagram altogether as interaction with Dayflash picks up. Right now, the app is only available on the Apple App Store, but according to the company an Android version is in process to be released in the future. If you have grown tired of the games and ever changing rules of Instagram, it might be worth your time to try another option that is growing in popularity with each day. You can learn more about the app from the Dayflash website and can download it onto Apple devices through the App Store.

Too bad it's mobile app only.

And for iPhones only to boot.

It's truly bizarre how Instagram fights tooth and nail to prevent anyone from using it on their laptop or desktop. After seeing how users find workarounds to post from their computer, you'd think the new platforms would get a clue. But they haven't learned anything. And now here's one that isn't even available to *see* on a computer??

I view IG on a computer 99% of the time. Over the years, I do like how IG has added functions like "Saved" and "Tagged" on the desktop/laptop version. The only thing missing for me is the native upload function and viewing larger images. The larger images are there. They just need to display them as such.

Desktop Example: This is the normal view:
https://www.instagram.com/p/BdTVUT3HonB/

The is the larger view:
https://www.instagram.com/p/BdTVUT3HonB/media/?size=l

Funny how the larger view on Instagram has a Facebook favicon. I know FB owns them, but they've been trying to keep that brand separate.

Now, they want to make sure there's no mistaking FB owns IG.

If they are fightong tooth and nail like you mistakenly say, why is there an IG app for Windows in the Microsoft Store developed by IG themselves. If you install the Windows app when you right click any image in your PC and select Share, Instagram appears in the options and when you do so you can post directly from PC and crop, add filters if you do that, and add the image description even alowing to copy and paste your hashtags copied from a Notepad file. Truely biased comment and the person writing it is missinformed. Maybe even paid by the Day Something app that might let you expose your work to maybe 10 people that have it :-)

No such app on the Mac, which is what I use. Would be nice to have one, because I have to use silly tricks to upload from my Mac. I find trying to use IG from my computer to be a hassle. And sorry to burst your bubble, but I have nothing to do with Dayflash. If you actually read my comment, you'd see I was lamenting the fact that Dayflash doesn't even let me see any content unless I install their PHONE APP. Sheesh!

500px should be the best platform but it’s become a massive let down lately.

500px I'm only sharing to other photographers (you're not my market) that don't care about my work nor will they buy my work.

And regardless of how professional photogs are supposed to be or how good your work is, the nude model pics are still the most popular.

Human sexual psychology is a bitch, aint it?

Might be more popular but commercial work pays way more. Likes don't put a roof over my head.

The 500px that was acquired by Visual China Group aka Getty East? The 500px that tried to copyright the first ever photo of a black hole? That 500px?

as others noted mobile app only and iphone only when will app developers learn that there are more android users than iphone users https://deviceatlas.com/blog/android-v-ios-market-share#us

How about Vero? Have you tried it? Also, it's unthinkable in this day and age to have an app for iOS only, even if there is promise for Android.

Do people even still use Vero?

Did people ever actually use it?

I gave it a shot, once. If I remember correctly, it was such a pain in the ass to get to the top of my newsfeed. It wasn't as simple as in FB and IG.

But, I did like how when viewing horizontal images, it rotated and best fit the screen, similar to FB.

That was a thing for a week then there was a thing about the owner being an asshole or something and it all stopped.

I think you meant Vero. You know, the other hot fad about a year ago whose hype train rose and fizzled in less than a month.

Here's the problem. Like Facebook, Instagram is so well established with it's user base that a mass exodus is unlikely. Even if it is the best thing for photographers, what good is it if all you are doing is showing off to other photographers frustrated with slipping between the IG cracks and lacking exposure to potential clients.

Dayflash, I am sure is another wonderful social media outlet. But do we really need another one?

Yes Steven, if we are ever to break free of the money grubbing tyrants of Instagram/Facebook we need a new platform. I grew my IG account organically to over 8K followers starting in the fall of 2015. Between 2016 and 2017 I was getting as many as 1-2K engagement. In the last year I get 200-300 engagement :-( I have been algorythmed out of sharing on IG. Just my 2 cents.

I think what Steven was trying to say is, while on paper this new platform do seem promising, it's very new, and the total number of users is nowhere near instagram.

Reading about the features, I, as a photographer, am interested. I want to put a few of my best works there. Now the problem is, put it there for who to see? Most probably to a lot of fellow photographers who couldn't stand instagram anymore, and a spoonful of possible clients.

An analogy: you own and operates a camera shop. Now there's a new photography mall opened. It's a new concept of putting every photography needs in 1 place. Superb facilities, big spaces, everything is awesome. The catch is, consumers don't know about this place. So if you move your shop there, you'll be joining a lot of other camera shops, with only a spoonful of buyers.

I just want everyone to go back to using flickr.

Their new updates are really nice!