I'll admit, I was a little shocked when I came across Henri Kack's Reddit post last week. That's right, the band notorious for taking down Napster in the Northern California Lawsuit filed in December of 1999, is now being accused of using an image from a concert photographer/fan without permission. Released on the band's official Metallica YouTube page on November 17, 2016, in the latest video for their song "Murder One" you can see at 5:33 the image in question. Although altered and animated, it's clear that this is indeed the same image that can be found on Kack's DeviantArt page.

Watch "Murder One" and see for yourself at 5:33 if you feel this is indeed the same image

Kack stumbled upon the video and caught a glimpse of a familiar image on December 20, 2016, almost one month after the video was released. Here is what he wrote on his Reddit post that has since drawn a decent amount of attention from other readers, photographers and fans of his work.

So Metallica used a picture I took back on 2009 in their 'Murder One' music video without asking any permission. When I saw the video first I thought that wow such an honor that they used my photo but bummer that they did not mention who took it anywhere. I tried to contact them through the website and their management's website and did not get answer. It was month ago and still no answer. Where can I contact them? What can I do? What should I do?

The photography community that has stopped by his post has left some valuable comments, and helped by asking many questions with regards to the best possible outcome.  As photographers, unfortunately putting your work online simply because you are proud of it can come with consequences. Hence the reason for my article from last month.  Since Metallica should know that it is Unforgiven to trade or steal art I just found this situation too ironic and needed to do what I could to help.

From reading through comments on his Reddit post it's easy to see, Kack isn't seeking much, he just simply wishes he got a little recognition for his work. I think most photographers would agree, Nothing Else Matters in the end, all we want is credit, especially when it comes to a genre of photography we are passionate about.

To see more of Kack's Work check out the links below.  If you have any advice or have been through a similar situation please leave a comment, as I'm sure all of us would be grateful should we come into this situation in hope that there is some sort of payback And Justice For All.  OK enough now, that's all the puns I have, what do you expect from an uber Metallica fan?

All images used with permission of Photographer Henri Kack.

Blame the media creators for that, not the band. I seriously doubt that Metallica were standing over the shoulder of the person who made the video making sure that everything was 100%.

I'm not a fan of them but I think it's wrong to put the blame at their feet for something that was most likely out of their hands.

Yet the original photographer deserve a response from them or from their management since they commissioned the work so they are responsible for it, even if not in a direct way.

I've worked with lots of corporations who commissioned work having no idea regarding the source of any content or even that it was something they should be aware of. When asked about it, they typically responded (and from a pragmatic standpoint, rightfully so) that it was the responsibility of the individuals doing the work. Of course they still have some legal responsibility but so does the guy who drives over the speed limit...it doesn't matter unless you get caught.

Personally, (and I'm sure I'll be voted down for this) I have no use for people who demand recognition.

Not even the same chord. 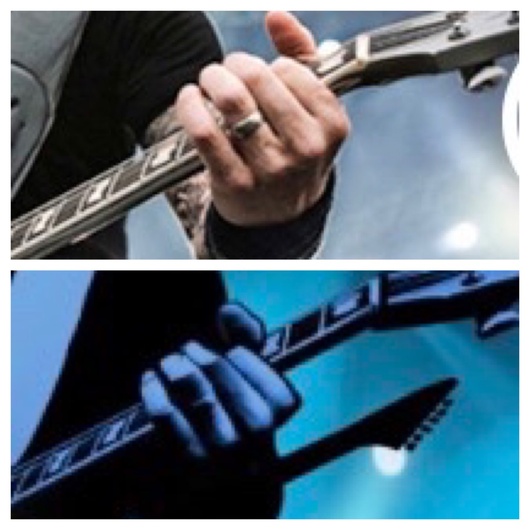 guitar is redrawn lightly but pegheads are in the same position, and everything else matches...

So they redrew his knee position too?

Why would they draw more frets? This just isn't the same photo at all.

I guess to make it different enough...
Both hands and fingers, guitar head, face is exactly the same.
I think it is mostly a drawing with major parts taken from the picture.

It's possible. After watching again I see lots of photos being used in the animation.
One thing I'm not finding is credits.

OK, I may be changing my mind. It seems Robert Valley simply lifts images then alters them slightly. 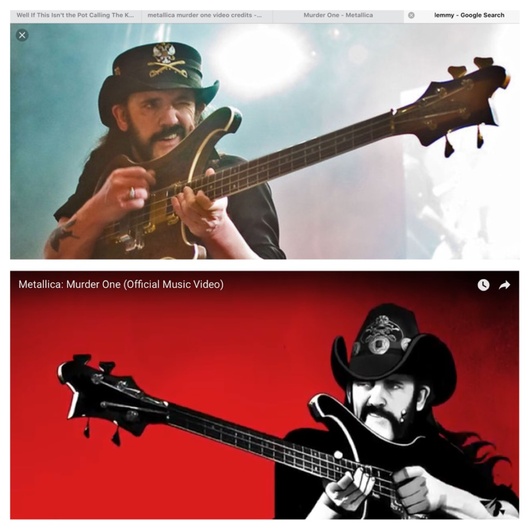 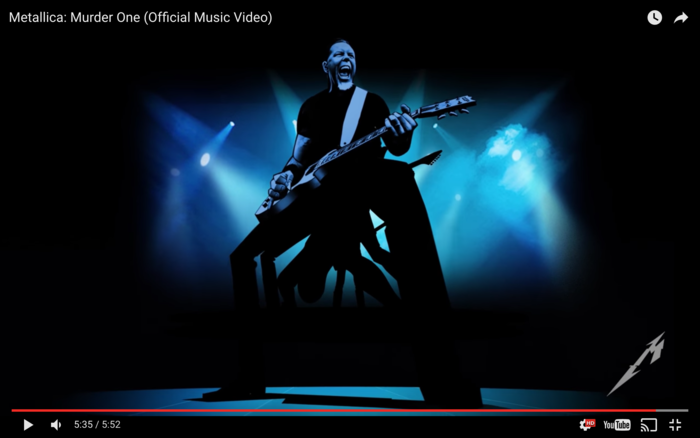 My point is that animator Robert Valley uses photos he finds and manipulates them for the video. This is just another example of where a photo was used. The photo above I believe was taken by Neil Lupin at the Hammersmith Apollo, London 22/11/08.

The band might not have created the video themselves but they have become the national spokeperson to equate NON-COMMERCIAL use of an artists work as criminal. Now Metallica has a video that has stolen an artist's original work for COMMERCIAL use. Even if they were initially unaware the video's creator did not seek to get releases or offer compensation from all of the photographers whose work they used, the moment the band or their management became aware of the controversey they had an obligation to make a formal public appology and offer some settlement to the artists whose work was stolen.

He should get a lawyer and seek damages then.

Metallica, give the photographer money and credit.

You really think its "out of their hands" to see to it that their products are legal?
And as they early on in the game of copyrights took a stand against internet piracy, this does concern the band members just as much as the people making the video.
And ye, I lost my respect for Metallica back in the Napster era.

Kenny, I still am a fan but I'll be honest when I put them on I don't play anything newer than "And Justice For All" I'm sure they have some creative control and probably have no clue what is used, I'm sure things are presented to them and they make choices based off a style or look they were hoping for in the video.

They may own the brand but they definitely can't be checking every frame on a video for possible copyright infringements. That's why they hire people to do this. Sure, they are ultimately responsible and I agree that they should engage in some form of restitution to the photographer, but you can't say that they deliberately set out to infringe his rights until this is proven as their intent.

"I think most photographers would agree, Nothing Else Matters in the end, all we want is credit"

Seriously? When was the last time you paid your mortgage with photo creds?

As stated in the article, it's not about money, it's simply about acknowledgement. If you cant give it, don't use/steal the image.

If you came up with an idea you pitched to your boss that would save the company millions, and the very next week, he announced your idea to the company and got all the accolades, but never mentioned your name or that it was even your idea- how you'd feel is how the Redditor feels right now.

I bet that phrase was there just to make the pun :)

Dude it was a Pun. The Metallica song....."Nothing Else Matters"..... I strung them through the entire article. Sorry guessed you missed it or are not familiar with their music. Thanks for commenting!

I understand the pun. Why make the ridiculous statement just for the sake of using a pun if you do not agree with the statement you are making, dude? Is this theonoin.com for photography?

Well see in my writing I'm kind of always a smart ass....I really don't think anyone should take the sentence so seriously, but if you want to go that route knock yourself out ;)

Your definition of smart ass is much different than mine. You gave it a good shot though, so I'll give you that.

hahah well if I went full smart ass my articles would never get published. So eh.....thanks!

I enjoyed your puns, anyway. Some light-hearted fun!