Beginning in 2013, I began to spend a lot of time photographing on a five-block street in the SoHo neighborhood of Manhattan called Greene Street.

All photos are shown in order as if you were walking down the street.

The cobblestone street at the heart of the SoHo Cast Iron Historic District is one of the most unique and luxurious places in Manhattan. Lining each side for most of the five blocks are some of the most gorgeous cast iron buildings in the world, built in the mid-to-late 1800s during the height of the garment boom. 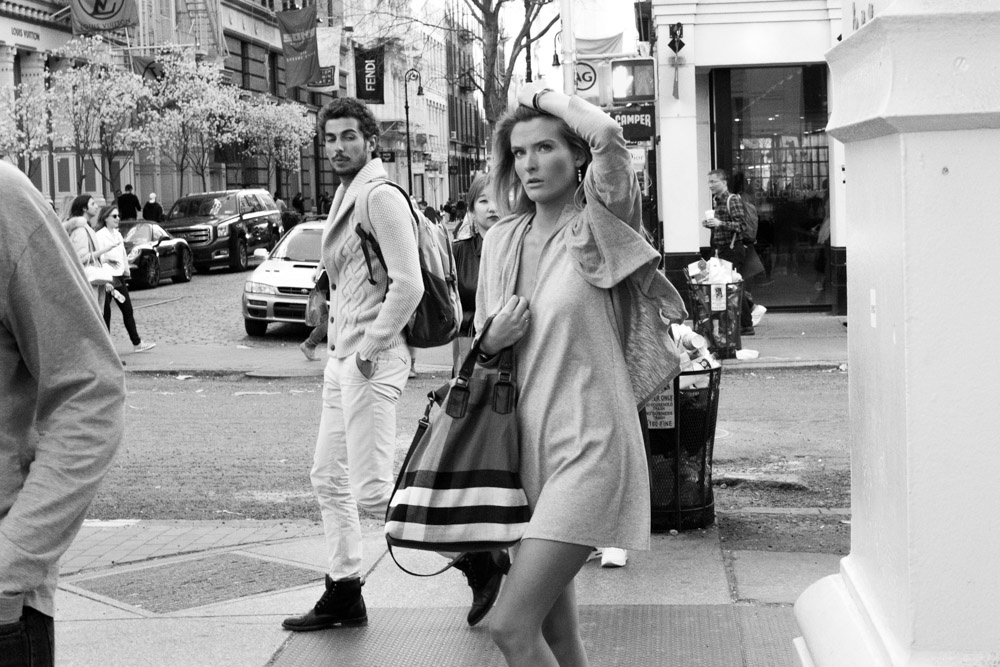 These buildings were at the height of building technology for the time and housed high-end showrooms for the garment industry, with immigrant workers churning out product on the floors above, often in very poor working conditions.

The Great Depression started the decline of the neighborhood, and by the 1950s, many of the factories had moved further uptown. This gave an opening for the artists to arrive in the 1960s and 1970s, the heyday of the famous artists' lofts. The artists lived illegally in beat-up buildings, often without heat, and with the words AIR (Artist in Residence) posted out front to indicate to emergency services that people were living in the building. 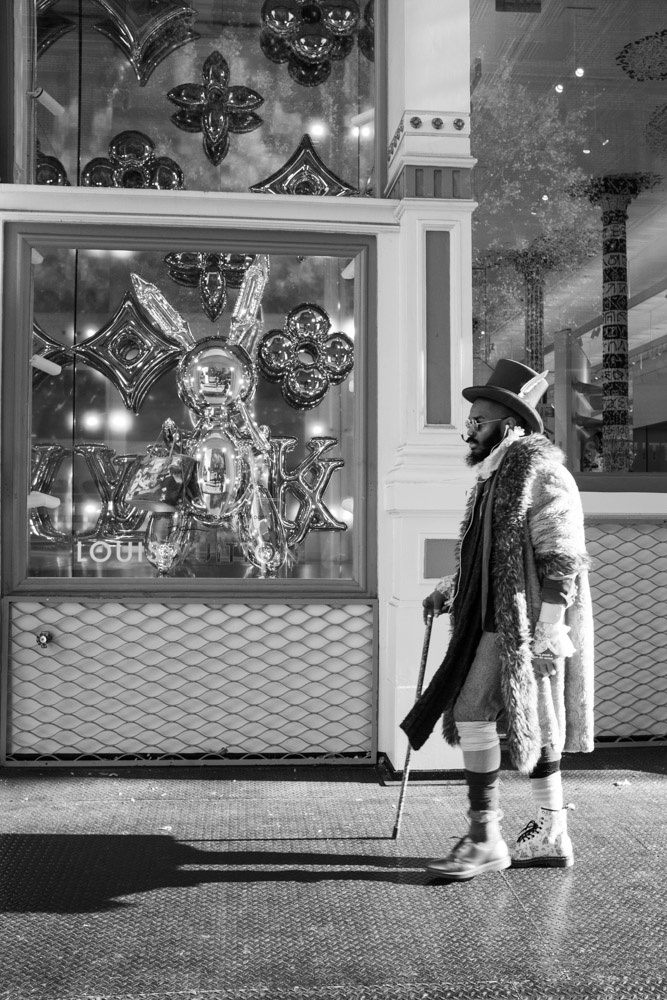 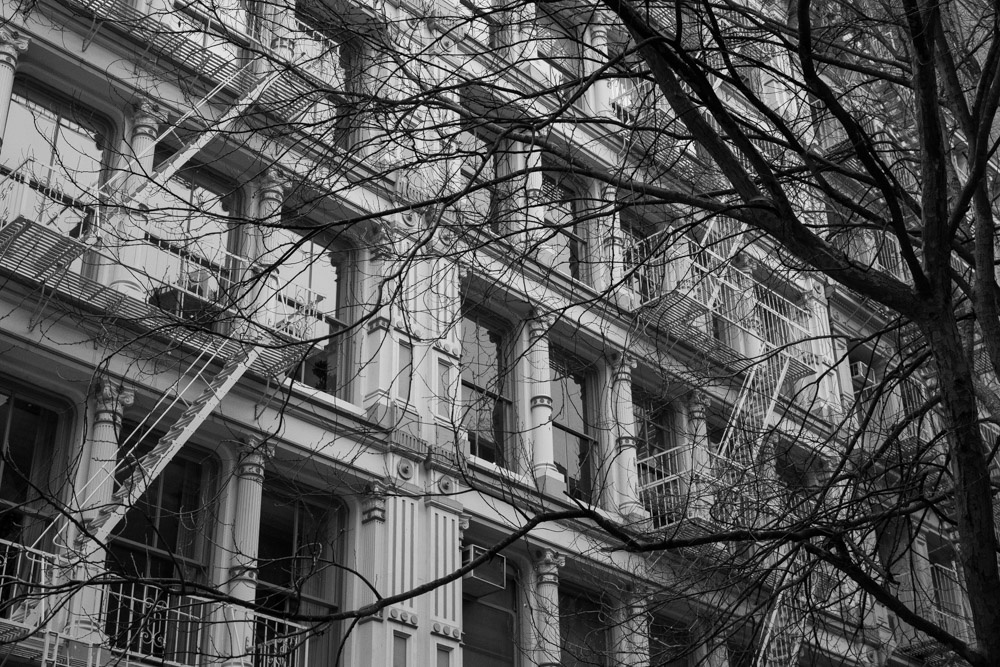 Following the artists came the gallery scene of the 1970s and 1980s, followed by the real estate boom of the neighborhood, which shot the value up astronomically in the 1990s and turned the neighborhood into a giant shopping mall.

The open loft apartments above now sell for millions or even tens of millions of dollars, next to the dwindling stock of rent-controlled artists, often paying a few hundred dollars a month for something that would rent for $5,000 or even $10,000 a month on the open market. 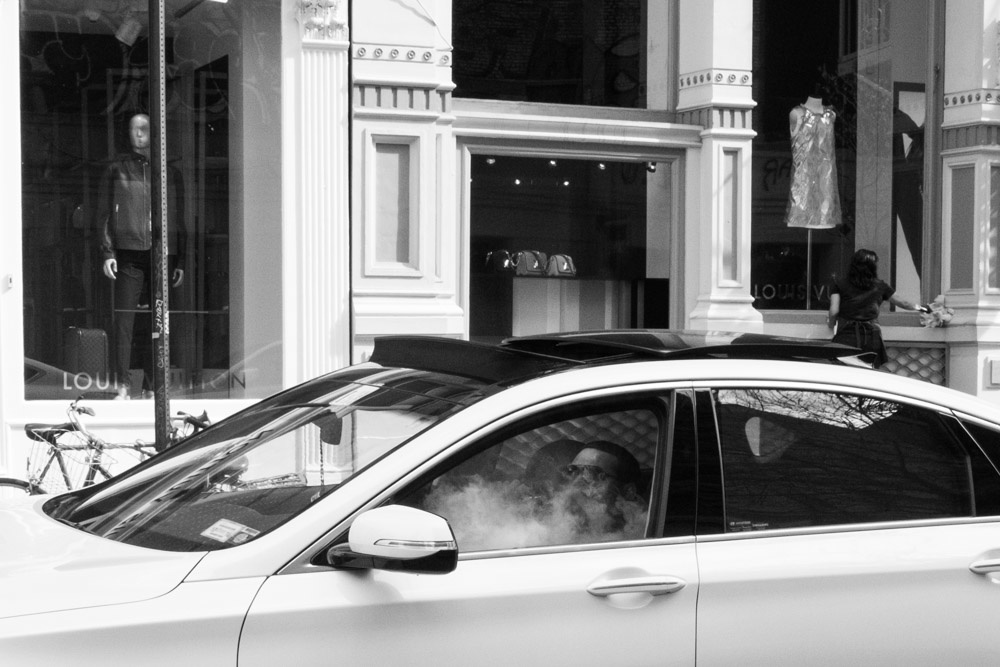 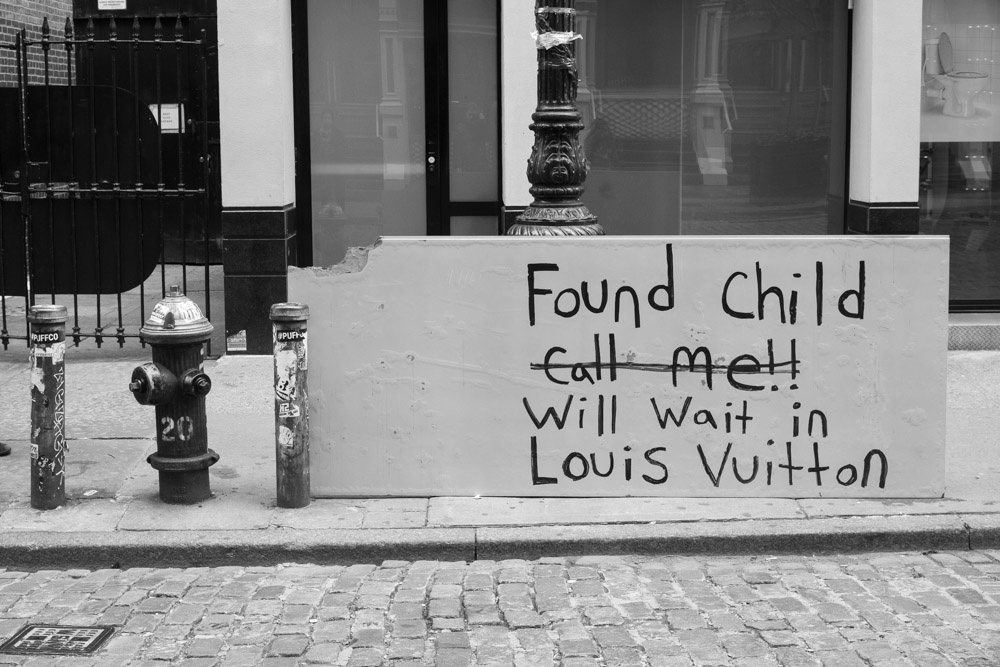 With the history out of the way, I wanted to give you an idea of what it’s like to photograph a street like this constantly.

I’m lucky in that a major part of my job is teaching photography workshops, which mix street photography, architecture, sightseeing, and history tours. In addition to going on my own, this brings me down Greene Street multiple times a week, where I get to both photograph and observe how people from all over the world photograph a street that I am so familiar with. 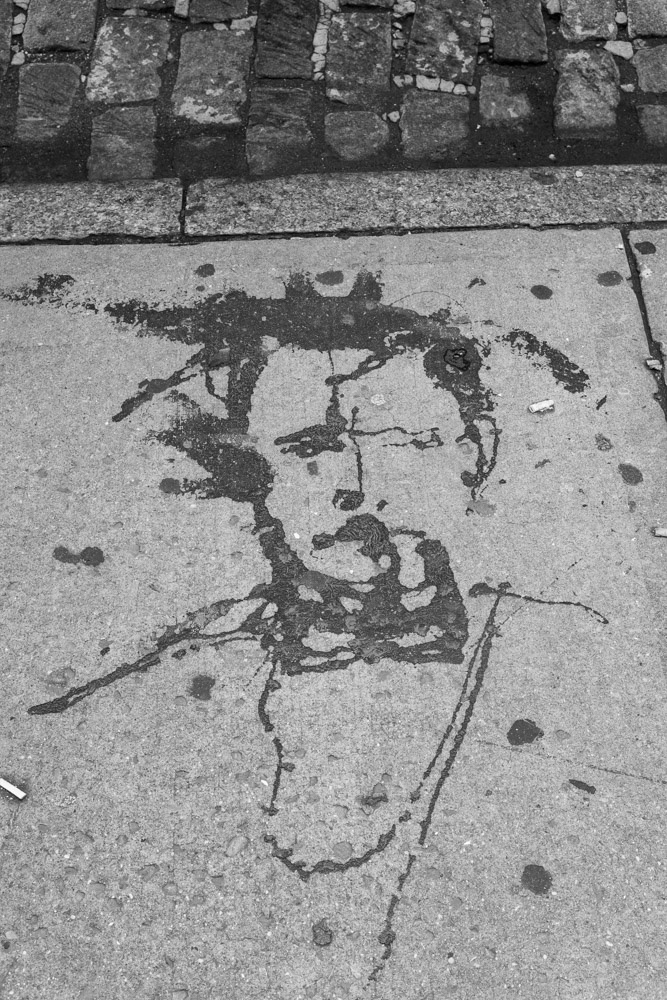 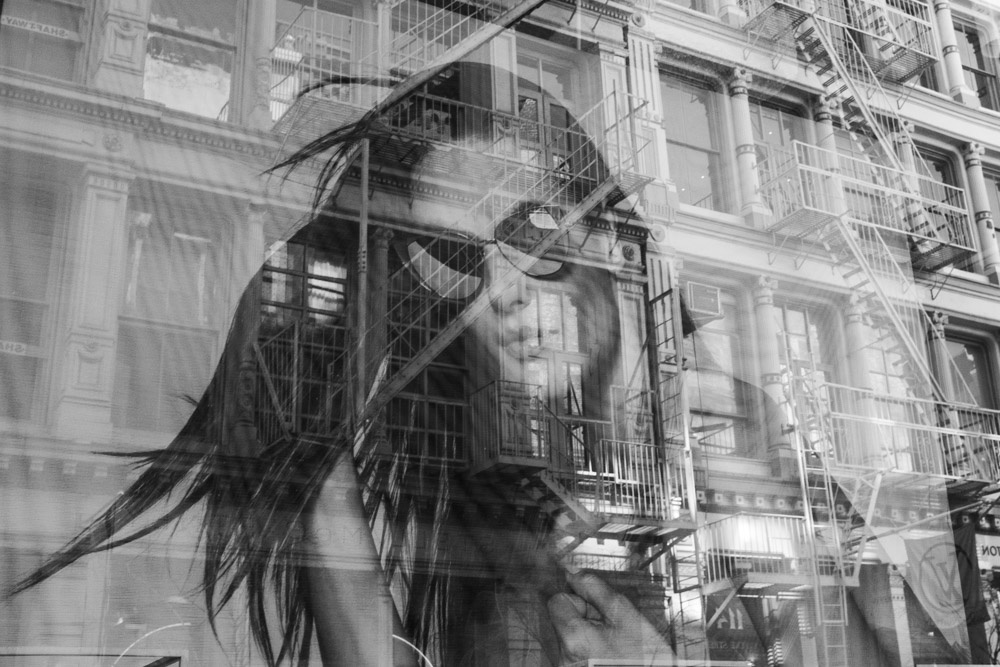 It’s been a humbling experience, to say the least, to watch people capture something in so many different ways and so many different styles, to find views or hidden things in plain sight that I completely missed while walking the street hundreds of times.

Some days, I feel bored with the area and walk through quickly, while other days, even eight years later, I still feel like it's the perfect place to photograph. But no matter how I feel, the photos come when they come, and there is no forcing it. I’ve gone a month without a good photograph, and I’ve gone a day with two of the best photographs in the series. I’ve gotten two completely different project keepers within a minute of each other. 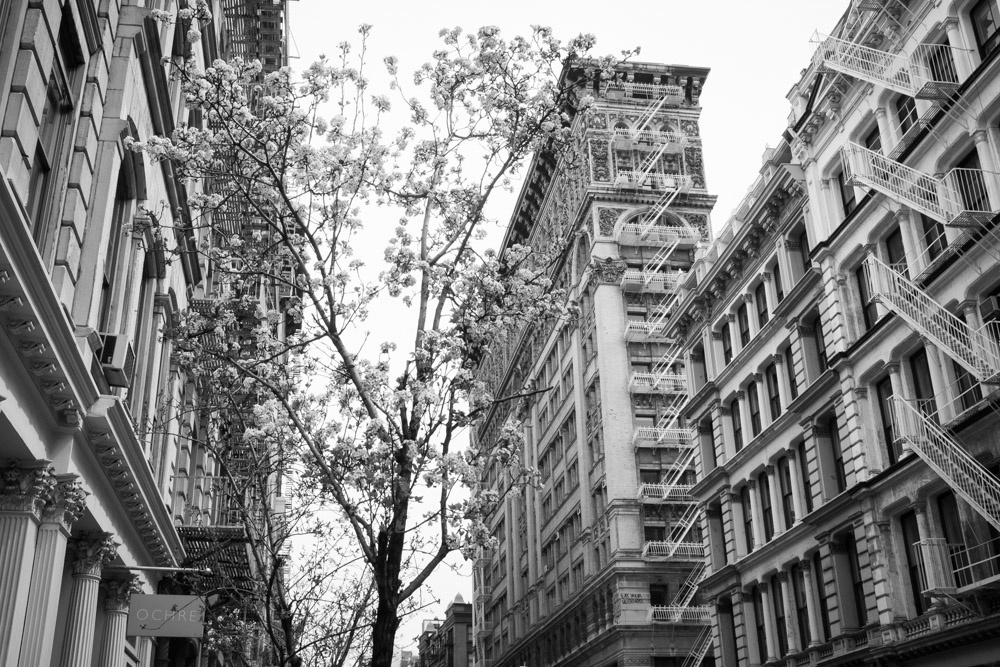 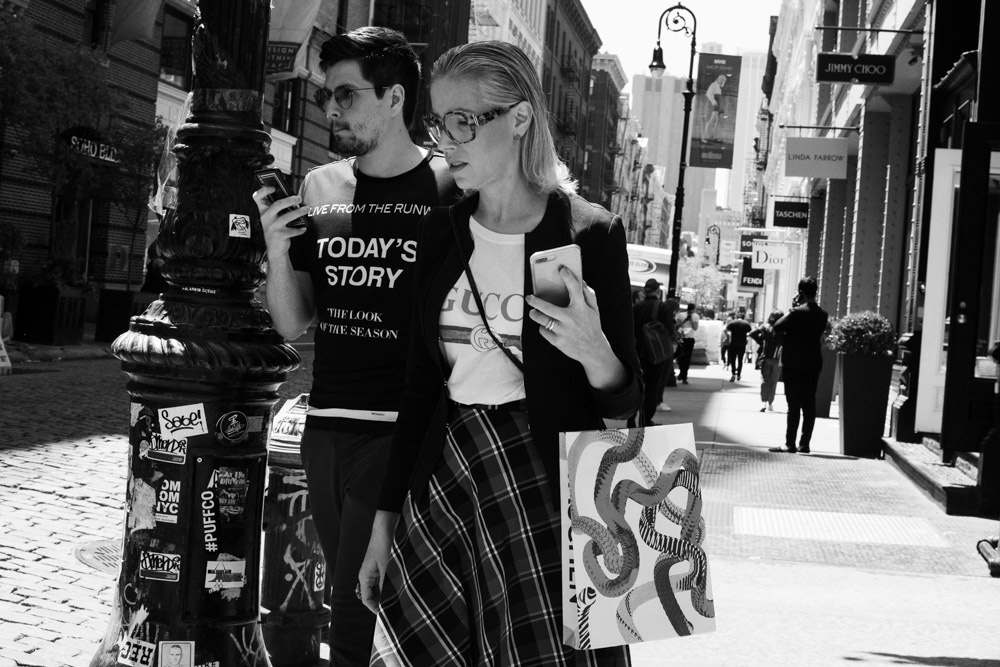 This has taught me that no matter how I’m feeling to always keep my attention up. The street can be teeming with people on weekends or sleepy in the early hours of weekdays, but no matter when it is, the photos come when they come — and they still surprise me in what they are.

Despite this, the repetition has given me a good feeling for when a great moment might occur, where to look, and how to act on the street to get the best photographs. I suggest for everyone to pick an area and to keep going back to shoot it. The more experience you have there, the more you will be ready to capture those incredible moments when they occur. 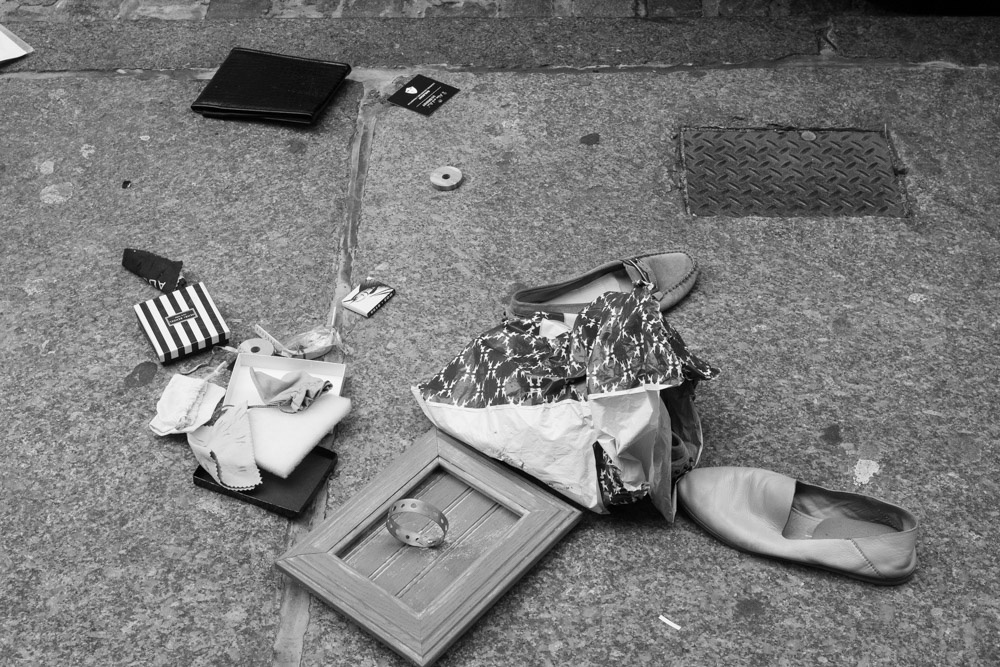 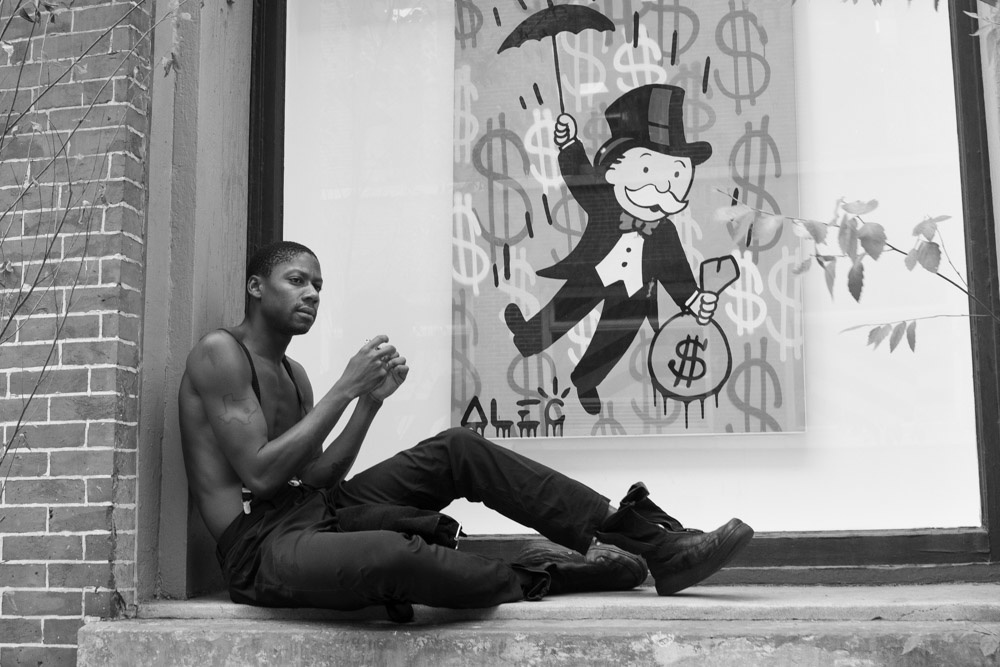 The project is called "100 Greene Street," and it shows the photos in order of walking down the street. I plan to continue the project indefinitely, maybe another two years, or maybe another five or ten. As I come across more great photographs, I knock out the worst ones from the project, and it continually gets stronger and stronger, which is very rewarding to see. 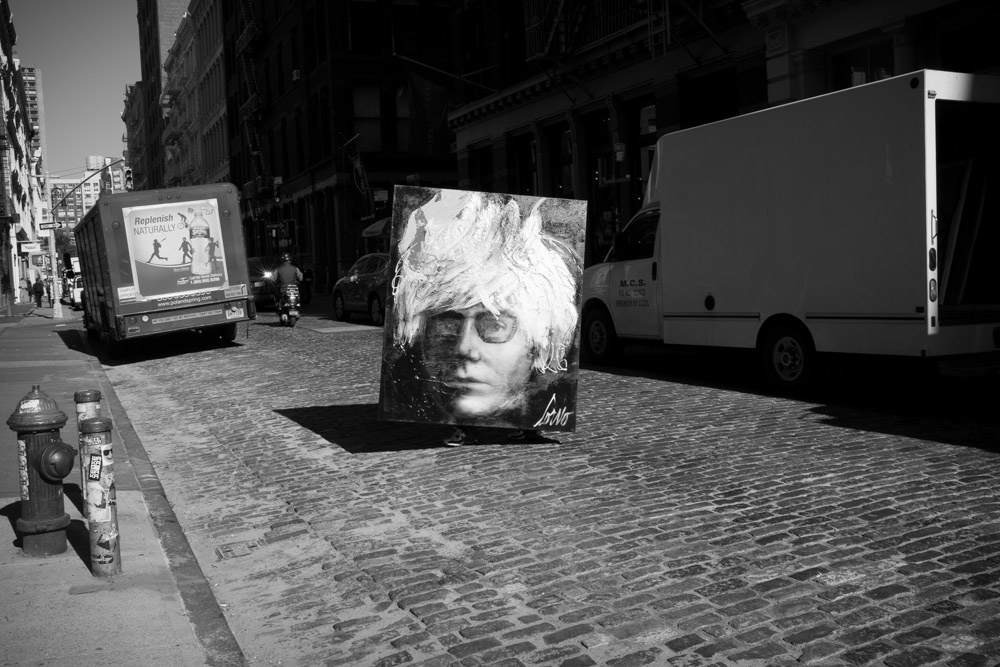 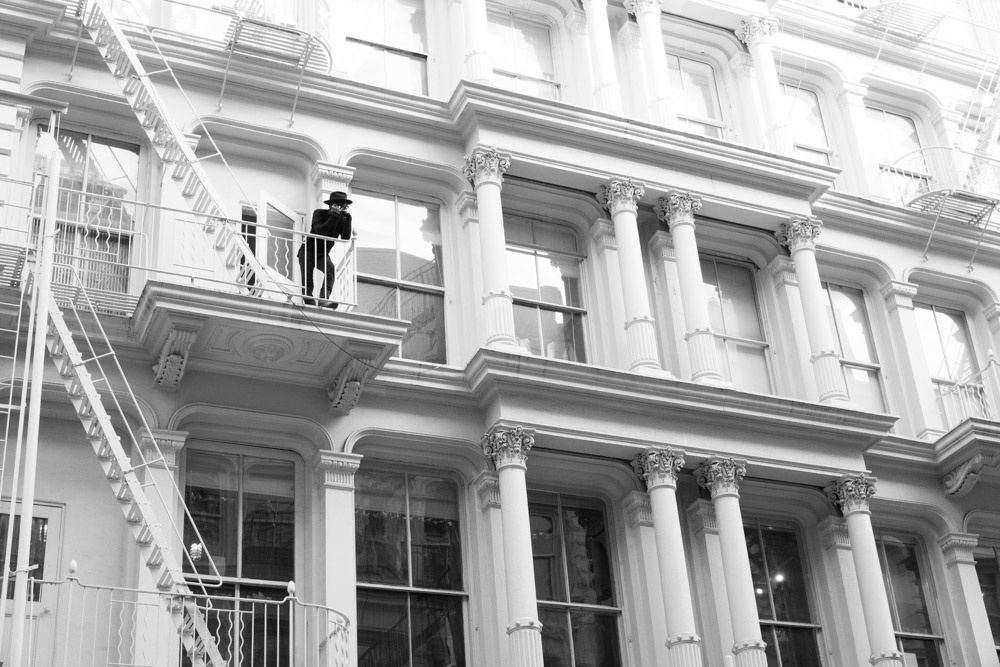 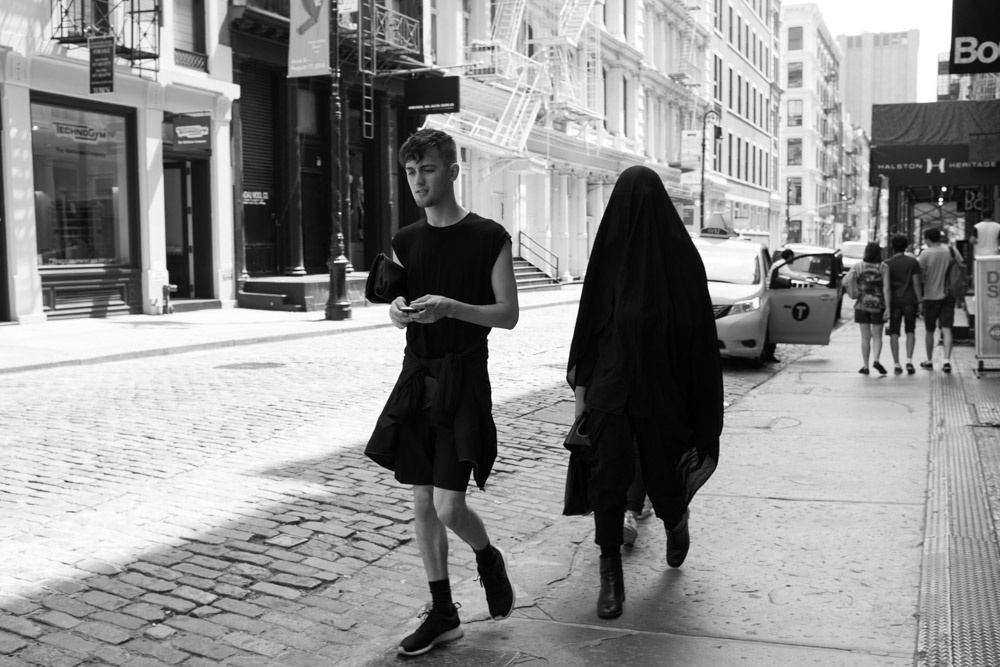 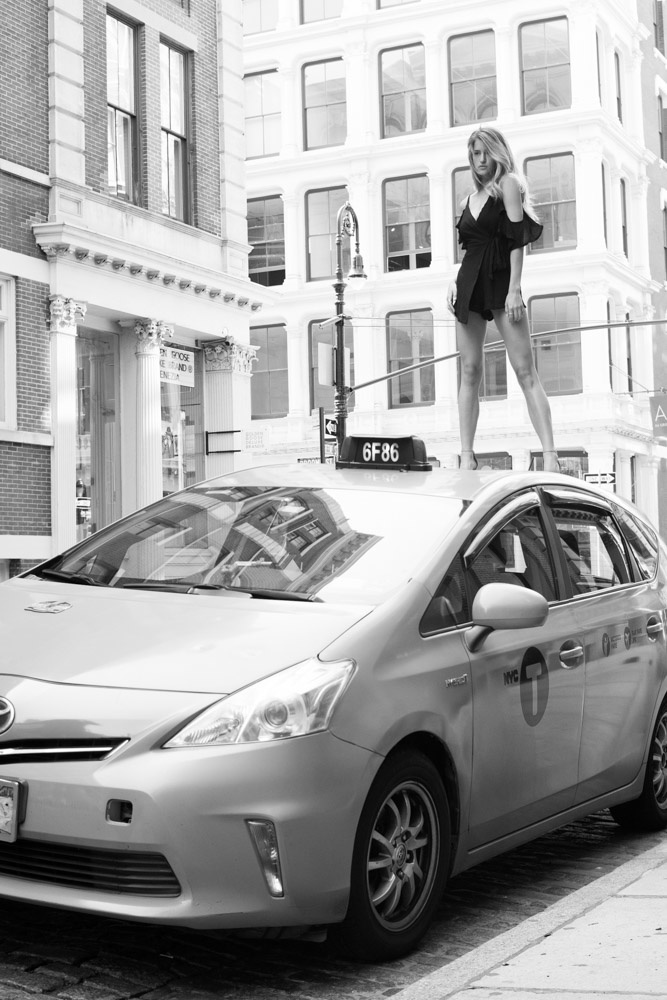 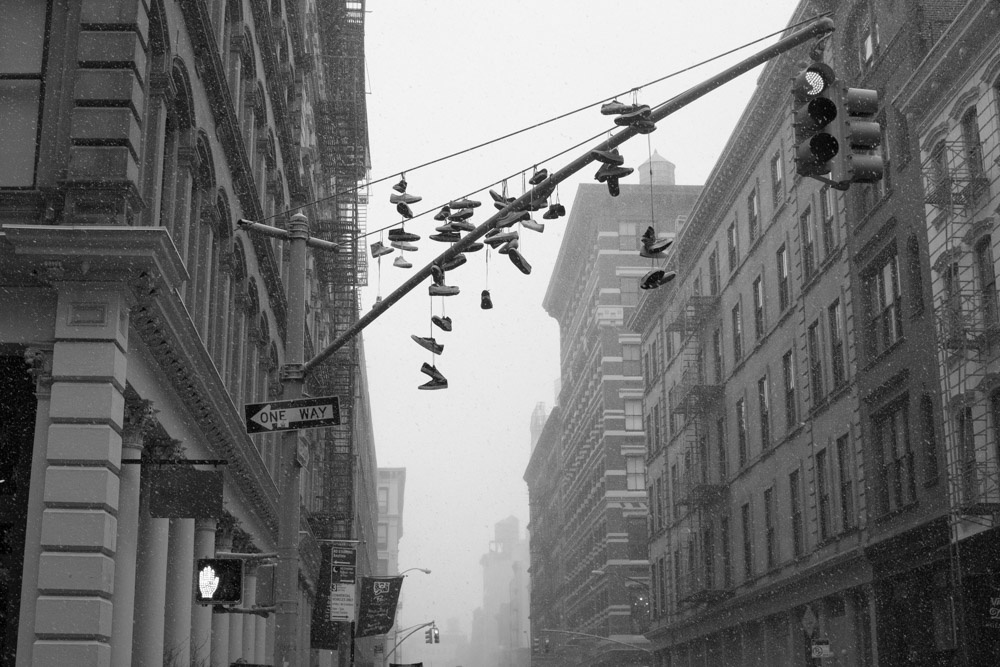 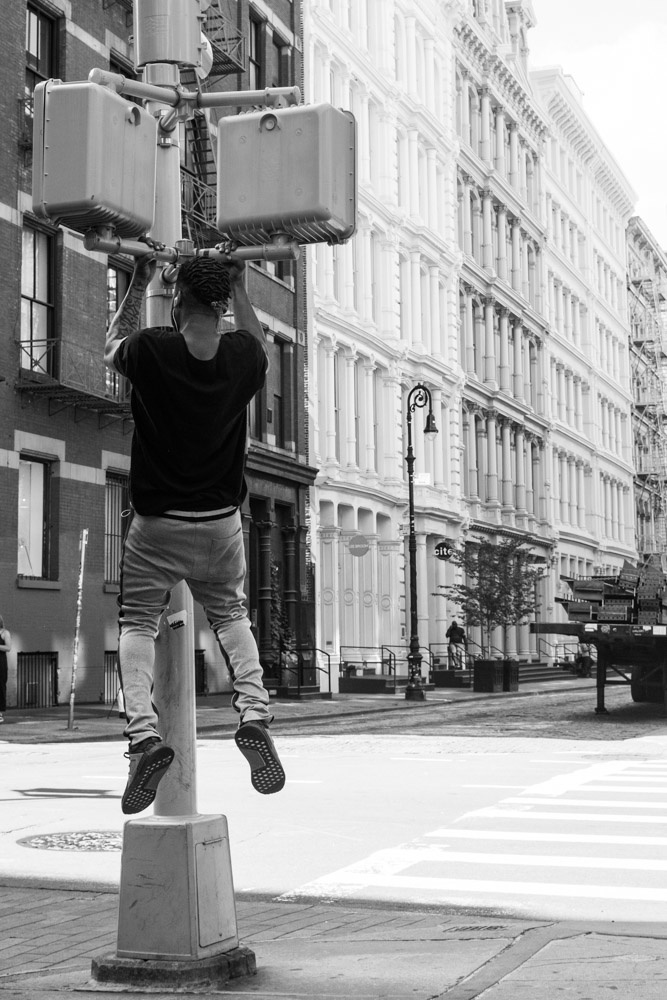 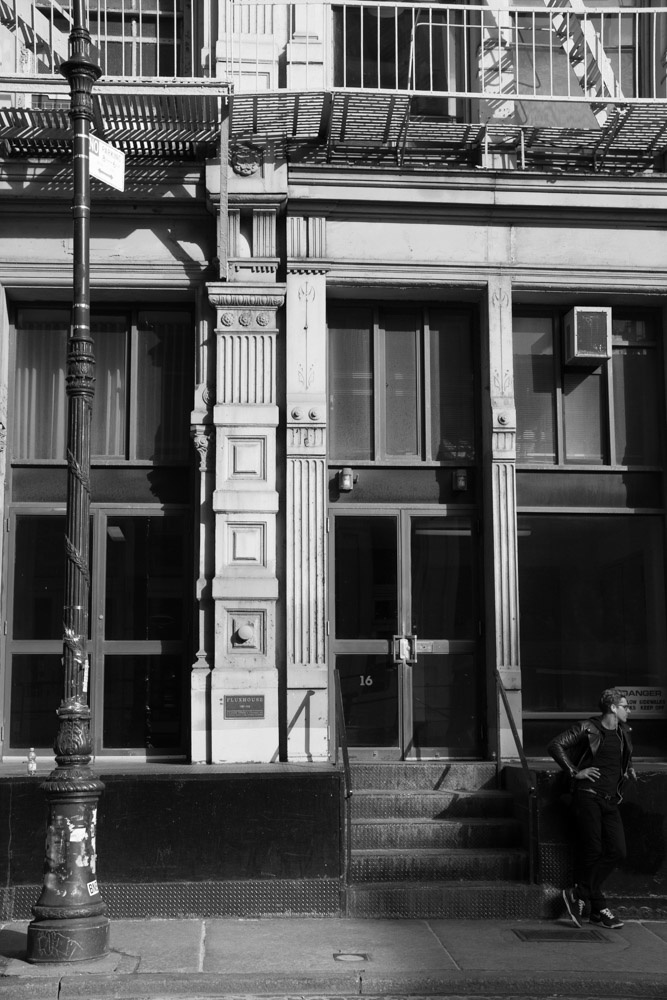 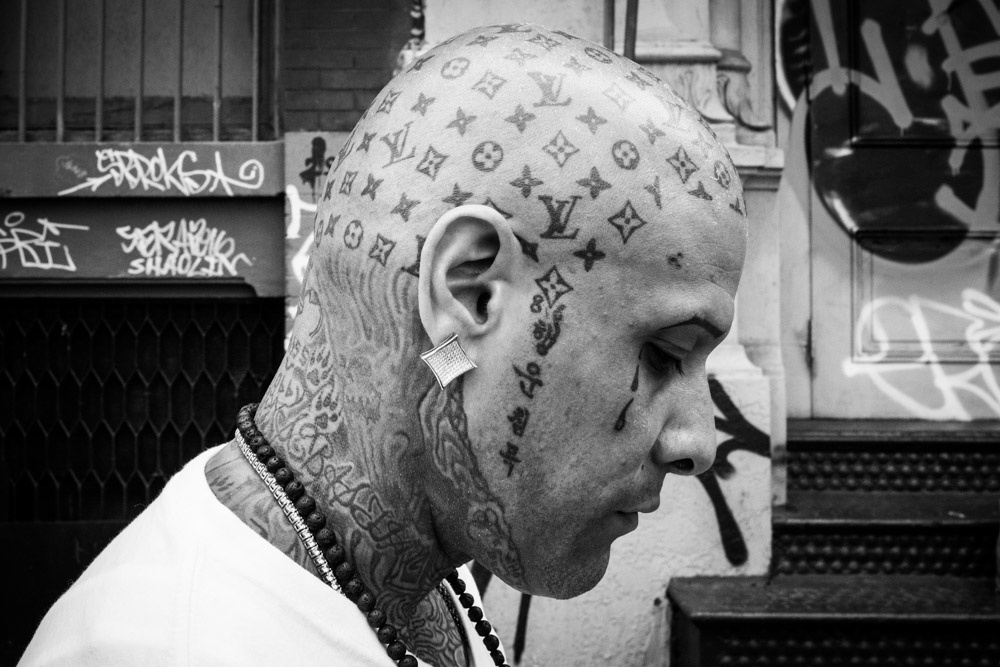 I hope you enjoyed the history and some more photos from the project are below. And I hope you visit it next time you come to New York!

Street / March 17, 2020
How to Not Screw Up Your Street Photography at Night

What a great collection! I guess, it'll be an valuable source of impressions especially in the longer future. Keep it up!

Thanks Nils - yeah that's the goal! Just hoping it gets more and more interesting as it ages and I keep doing it.