Sponsored by “Hunger Free Colorado”, a recent photo series gave digital cameras to 15 woman living on food stamps in Colorado, and asked them to document their lives using the cameras in a series called "Hunger Through My Lens". The concept is simple, but what it leaves us with, is some incredibly powerful images on the harsh reality of the lives of those battling hunger in America.

The mission itself has two motives - to promote awareness of hunger issues in America, and to empower those who are living on food stamps to not be ashamed.

Speaking to PBS, director of Hunger Free Colorado Kathy Underhill shows her passion for such a subject - “This issue is hard to talk about. There’s so much stigma attached to hunger in America, … everyone has this archetype of who’s hungry in America and it’s usually the gentleman on the side of the street with the cardboard sign.” Underhill added “The truth is, you’re most likely to live in a hungry household in Colorado if you’re between the ages of 0 and 5. You’re most likely to be hungry if you’re an older adult or a single woman. So it’s incredibly important for folks to understand that hunger can impact anybody.”

Many of the woman part of the series are victims of heath issues that have forced them onto poverty, suggesting that a broken healthcare system may be one of the perpetrators. 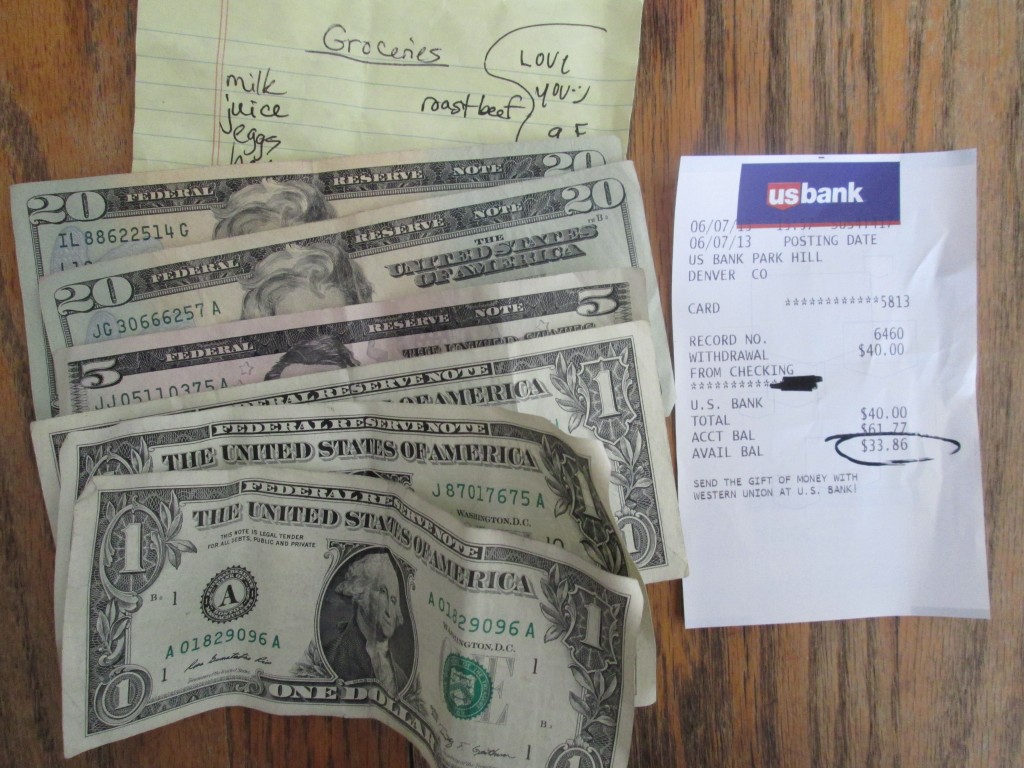 “After I lost my job, grocery shopping became extremely stressful. Even just the act of making the shopping list caused stress, knowing I wouldn’t be able to afford many of the items on the list. One morning, I saw that my nephew had written ‘I love you’ on my grocery list, and just that small notation made me feel so much better.” - Andrea Fuller 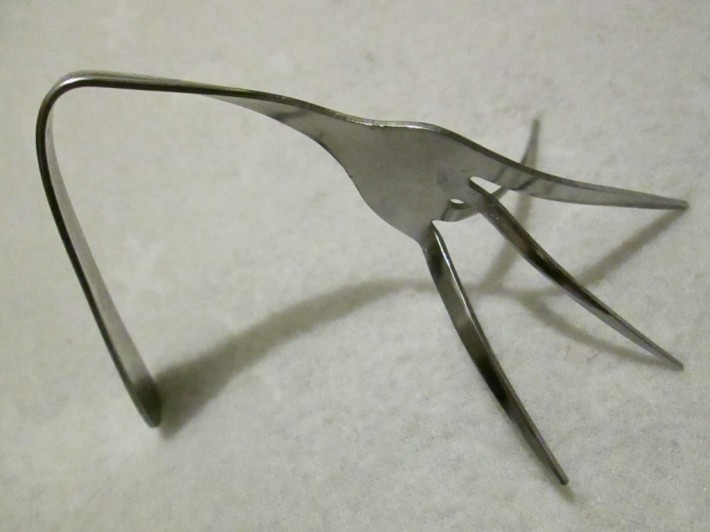 “This photo represents a couple of things for me. First, you can’t eat with a broken fork just like people in this country can’t eat because of a broken system. But the photo also symbolizes the delicate balancing act that people in poverty have to maintain– finding employment, housing, transportation and food.” - Elizabeth Deak 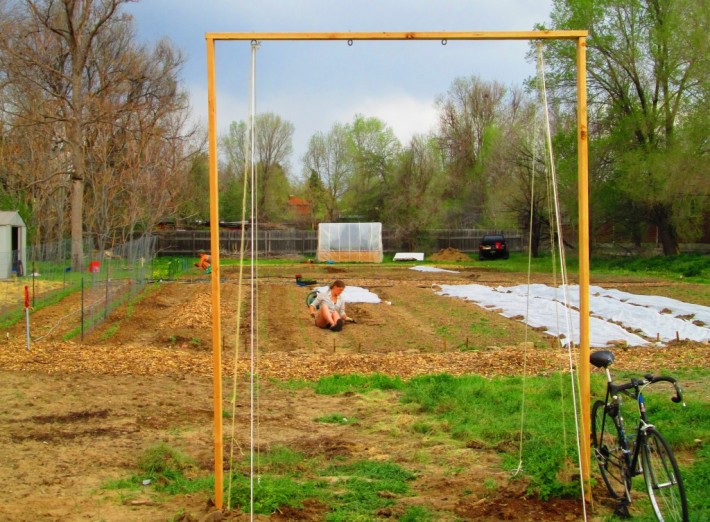 “I took this photo of a community garden in Denver. This small plot of land helps provide food for people who don’t have enough money to buy fresh produce. There is so much land available in this country for gardens like this. Why don’t more people have have access to it?” - Ashley

“I took the photo of the beautiful bananas in a large, chain supermarket in a nice neighborhood. The other bananas, which were over-ripe and more expensive, were in little corner bodega in a low-income neighborhood. It struck me that people living in poverty have no chance of eating nutritionally with that kind of disparity.” - Caroline Pooler 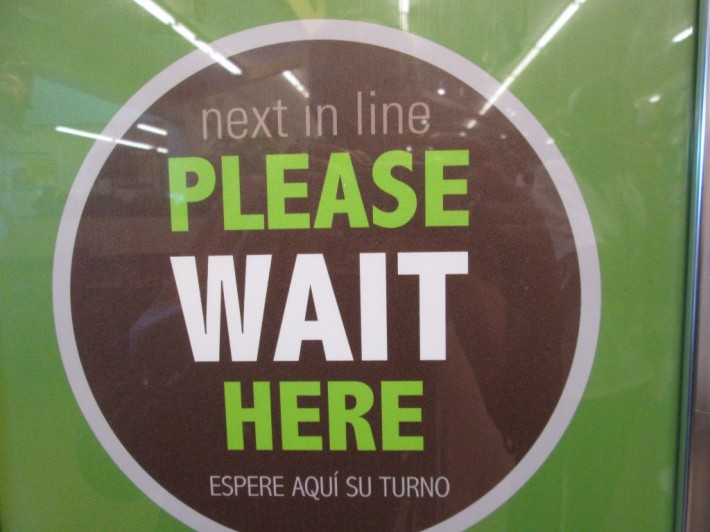 “Poor people encounter signs like this every day. They wait in line to hand in paperwork for assistance. They wait in line at food banks, at soup kitchens. Often it feels like too much of my life is spent just waiting.” - Victoria Asalp

The images taken are currently on display at Denver libraries, churches, coffee shops and various other locations across the city. At each locations opening, the women come to speak of their personal struggles.

For more images and information about this project, check out the news report conducted by PBS NewsHour or check out Hunger Through My Lens' website.

Posted In:
Other
Pictures
Interview
22 Comments

You guys have become increasingly political and there is no doubt you are leftists. I'd appreciate it if you could stop.

Zach, my remark was in regards to a trend I've been noticing with FStoppers in general, it was not directed at you personally. This story is not only political, it is political propaganda.

The average monthly benefit per person is $133.07 per month. That is roughly the same as my middle class household.

Today, 50 Million Americans are on food stamps. That is almost 1 in 6. That means we are spending $6,653,500,000 every month.That's about $80 billion this year. You could buy the Ford Motor Company for that and have enough left over to buy Twitter.

I don't really want to get into it. I want to read articles about amazing photographers doing amazing photography. Politics are a slippery slope and no matter how PC you think it may be, there is a lot of people out there you will be turning off.

Realistically, it IS a story about photography. Granted not with a technical motive, but a very creative motive. If you want a computer generated list of Photography based articles, Feedly might have you covered. Otherwise, if you want a human's curated list of articles, you'll come here or one of a dozen other blogs.

Have an open mind, learn something.

I don't get your issue with this. It's one photographers look at a life on foodstamps.. I think you're the one bringing politics into this.

the military spends over 600 billion a year. And so many of these people are the working poor that work 40 hours a week and still dont make a living wage... Walmart etc use the tax payers to make sure their workers survive.

Not so fast there Sean-
You're stuck on numbers-somehow they comfort you and the like minded folk that you interface with in your chat rooms. Fair enough.
Photographers have always taken up the cause for the down trodden, workers rights, Civil Rights, Human Rights, the homeless and the hungry.
Here are some names you might like to look up sometime-get your head out of those numbers. Open up your heart-maybe learn something.
Jacob Riis
Lewis Hine
Roy Stryker
Jack Delano
Dorothea Lange
Sebastio Selgado

I agree with Sean. A declaration of political affirmation or affiliation is not required when, as they say, a picture ( or choice of pictures) is worth a thousand words.

Your complaint is a load of complete nonsense. This story is a factual report of a photographic event, but I guess the facts, as they always seem to, have a liberal bias. If you don't like the stories, don't click on them, or better still, leave.

Not to a choose a side here, but how would this point out entire blog's political leanings? A great number of historical photo projects have shown a how a certain class of people live. The FSA photos of the past for example do not exactly extoll a happy existence for its subjects in most regards. Is it different because a master photography happened capture it? Since this is the from point of view of the people who are on food stamps, it would be skewed towards things that they notice. Things that perhaps you agree with or never needed to consider. That is the power of the arts and why it's so important.

perhaps some condoms with those cameras would help...?

Would you also direct your comment at the 900,000 veterans on food stamps, or do you just attack single moms?

If you loose your job (which is highly possible) and go on unemployment, you will quickly see how far that unemployment subsidy will get you. But I will assume that you have at least 6 months of rent saved up and didn't spend it all on your camera equipment. That's good because in the 50 states unemployment only lasts for 26 weeks (thanks to our broken system). 7months passes, in which time you will have tapped heavily in that savings, I'd like to how you would look at people on line with you applying for food assistance along with you. It can easily be you or any one of us. Our current situation isn't a promised one. People get sick, disabled, loose their jobs, etc. For you to blame it on having children is demeaning, inaccurate, and borderline ignorant. Like Bigbee stated, over 900,000 veterans are on the food stamps program. Our government said 'thank you' by approving the latest farm bill is takes away about $30 from every table in the U.S. currently accepting food stamps. After selling your camera gear to eat, you will be given a condom and another camera…

A Government that robs Petter to pay Paul, will always have the support of Paul. Not sure who said that.

It must have been a naive 12-year-old who lacked a basic understanding of the role of government in modern society.

So the role of government in modern society must be then to get as many people as possible in poverty and keep them there. That's what the numbers say. Seems like that's what governments have been doing for quite some time - nothing new or modern here.

You clearly have no idea how these safety net programs work. As Feeding America indicates, "SNAP already has strict time-limits for unemployed workers. Able-bodied adults without dependents (ABAWDs) may only receive 3 months of SNAP benefits during any 3 year period, unless they are working in a qualifying job training program." As recently as May 2007, the unemployment rate was just 4.4%. Do you think that there has been some huge shift in fundamental human nature in the interim? Unemployment remains relatively high at 6.6% because there are 3 job seekers for every opening, not because of any increase in the generosity of government benefit programs.

I love comments like "you have no idea." I do have an idea - like an MS degree and I actually passed courses in economics and econometrics. You know - all that math and stuff.

Your degree means nothing if you demonstrate via what you actually write that you have no understanding of the issue. And again, you clearly don't.

Where does wall street , wall mart and military/prison/pollution industrial complex fall in your analysis