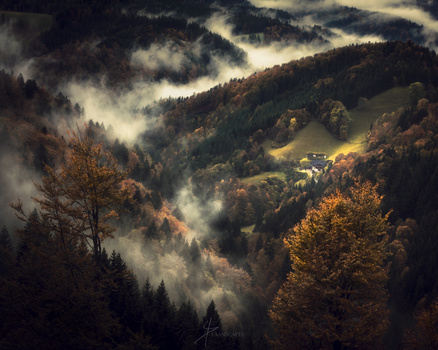 ~ This is an oldy that I captured back in the autumn of 2013. We've been one of the highest peaks in the Black Forest that day, but because of the mist we didn't have any spectacular vistas looking out over the Alps to the south... At all. My girlfriend was stood about 3 feet away on that peak and I could barely recognise her silhouette. It was just so damn misty. The trip didn't pan out, but just as we were coming back from an uneventful day from a photographic point of view, we came over a hill on the way to our accomodation there.

Then this happened. Finally the mist dissipated; revealing spectacular autumn colours underneath and clouds that seemed utterly misplaced. We had been searching for compositions in all the remote and wrong places, while this shot was just there; waiting for us on the literal side of the road. There's absolutely no hardship involved in the making of this. Set up the tripod and pointed the camera down into the valley at f/11 with a crappy lens from the eighties.

I did took some liberty with processing though. Much like I did with 'Reign of Sorrow' in Scotland; not really removing or adding anything, but locally enhancing how the light hit the trees and fields. But that was mainly because I had just watched The Fellowship of the Ring for the 23rd time.

'Homestead' was captured somewhere between Furtwangen & Feldberg in the Black Forest (Schwarzwald), Germany with the D7100 at 35mm.