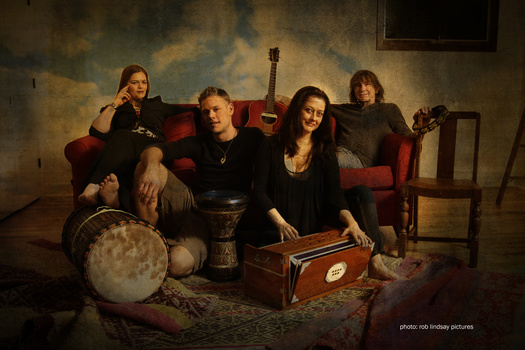 Asked to shoot an album cover for a Kirtan band, my first question was, "What's a Kirtan band?" Well-- it's very cool, is the answer. With great people. They make trancelike Indian-style meditative music, so that's what I went for.
We set up in their rehearsal studio which has a beautiful red couch that caught my eye right away. We worked out their positioning and I set up a single box lite camera right, far enough away that the exposure was similar from the closest person to it to the furthest. Shooting on a wide lens at 5.6 helped the depth too.
Working in Topaz in post, I added a sky background over the plain white wall and added a layer from their Grunge collection. All their FX's can be adjusted.
Small final adjustments were made in PS.