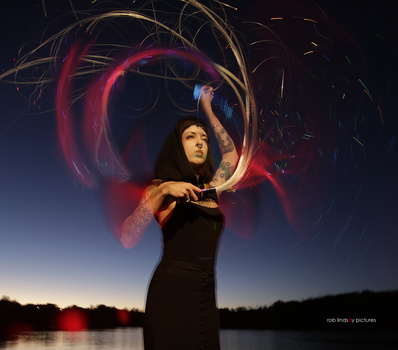 Inspired by a picture made by Joe McNally, one of my favorite pro's, when I met this group of Firedancers I asked if we could have a photo session. They agreed enthusiastically.
Meeting a hour before dusk at a local public lake beach i had scouted and plotted for sun position, we quickly agreed on wardrobe and they went to the restrooms to change.
Meanwhile my assistant, Rachael Black, an I set up a single bare Youngnuo flash on an arm of a gripstand, positioned on the dock they would be standing on. I put on watershoes, because that's where I would be -- in the water. Fortunately even tho it was late September, the water was still warm and only up to my knees. This put me at a low angle but more importantly shooting toward the fading daylight.
I also added a small, 160 LED source behind the subject sitting on the dock with a heavy red gel. That gave me the red flares and the slight red highlights on the models.
The idea I had was to create a coven, doing their strange thing at sundown. I asked for a faraway look from the models and we began shooting.
Checking the camera screen, I dialed in the shutter speed for background exposure and lights blur. This was captured at 1/4 second, hand held.
On the single girl's image I added some red blur above her hear from another image, and on both I hand painted stars into the background.
We had a blast! Next time with actual fire!

What pic Joe McNally are you talking about?

the Hawaiian fire juggler on the beach in Oahu.