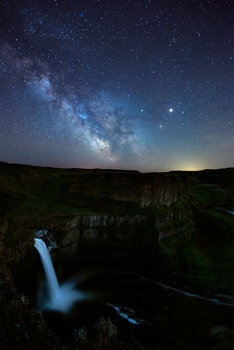 We camped out and stayed up until around 3 am to catch the milky way in the right position to compose alongside the falls (I would have stayed longer to have the milky way more in frame, but we got too tired and cold).

Though the photo was taken from one fixed position, the final is a composite of several images. The land was a frame shot during blue hour, and the stars is actually 8 separate frames, shot back-to-back, that are merged together using a median stack method in PS to remove the noise in the frame.