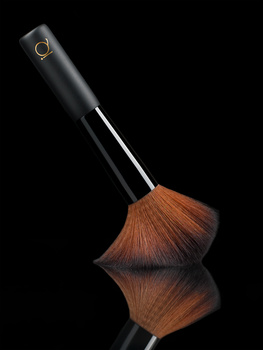 A friend once called me and said he wanted a picture as a print for his Cosmetics-Studio. He gave me all this filthy, tiny pictures he made himself or he found on the internet!! for printing.

I told him there would be a better way to do this and asked him for a new cosmetics brush. He was kind of in a hurry to get these things done, so believe it or not but this shot was a 10min shoot, 10min retouch, ready for printing.

I've done a product shot shortly before and had nearly everything in place. I got a piece of black Perspex, a fishing line, some tape and everything was ready.

I taped the fishing line to the back of the handle and attached the other end to a boom arm. Two striplights from each side for the reflections a black background and boom, we had a shot.

Let me know what you think of the Picture, would love to talk to you guys about it.

This appears to be dark-field lighting. This is a technique I want to master, myself. Looks like you've got it down.

It is, sort of, there are so many different approaches to get the look done. I believe you will master this technique with ease. Thank you for your kind words.

Hy Rebecca, was a little confused at first but know everything's completed. :-) Pretty exciting! Thank you for the chance.

Thank you very much Rebecca, i'm so happy that you have chosen my picture for today! Totally excited about it!