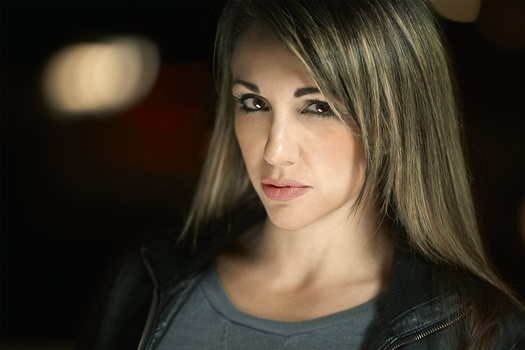 I achieved this shot mostly by accident to be honest. I was using the Phottix Luna beauty dish with a single Canon 580ex. We were initially shooting in a parking garage at the Sherman Oaks Galleria and had been asked to leave after just 20 minutes of shooting. So we decided to head down to the street and shoot right there on the sidewalk. On our way there the speedlite had slid back on the rail pulling it just outside of the opening to the beauty dish. As we were shooting I noticed there was this crazy light spill hitting her lower body and I couldn't figure out what the hell was going on. What I eventually realized was that the flash was spilling past the bottom of the disk inside of the beauty dish and bouncing off of the inside edge of the beauty dish causing a fair amount of up-lighting. Fortunately this worked well for her since most of the roles she auditions for are action characters and stunt doubling. I feel like this is pretty effective for those types of roles. Now I just have to recreate it.
Do you think this is an effective lighting style for an action character, or have I missed the mark? let me know in the comments below.