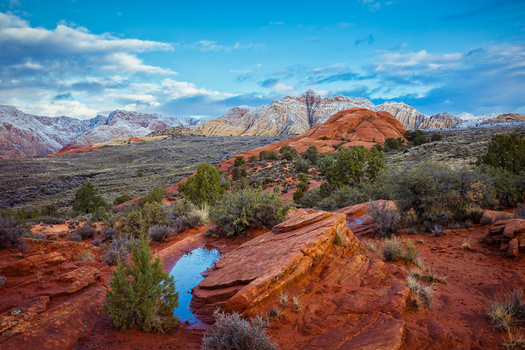 Snow Canyon is not named for snowfall, because snowfall in Southern Utah is a pretty rare thing, nor is it named for the white-colored sandstone, which is also fairly rare amongst all the more common red sandstone. In fact, Snow Canyon was originally named Dixie State Park, it was later renamed for Lorenzo and Erastus Snow, prominent pioneers who helped settle the Utah territory.

This shot was taken Christmas morning. I was headed to my parent's place to celebrate the holiday when I saw that the mountains had received a light dusting of snow! Snow doesn't last long here, so I told them I was going to be a little late and booked it over to Snow Canyon to snag this shot while the snow lasted. Totally worth being late to Christmas. :)