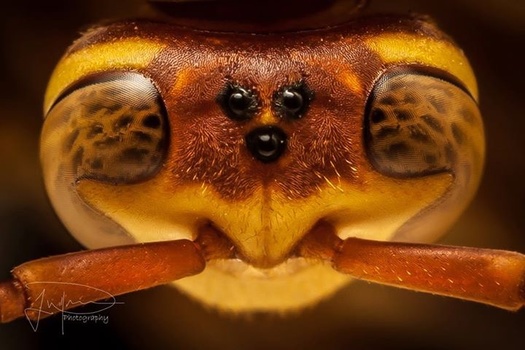 This is a shot of a life wasp head close up . I found a nest of wasps high up on the outside of a building last year in the summer time and I set up a ladder to get right up next to them so I could get this shot. This was a particularly difficult shot to get because there were about 5 or 6 wasps on this nest that were rather aggressive , but fortunately I had covered up with gloves and long sleeve protective clothing along with a mosquito net hood over my head to protect my face . Perhaps the biggest challenge was it was over 100 degrees outside and you can imagine how hot it was with all the clothing on as well as the adrenaline from being high up on a ladder photographing wasps that are occasionally coming after you . At the end of the session I was happy to walk away with this shot and nobody was hurt , not even the wasps.