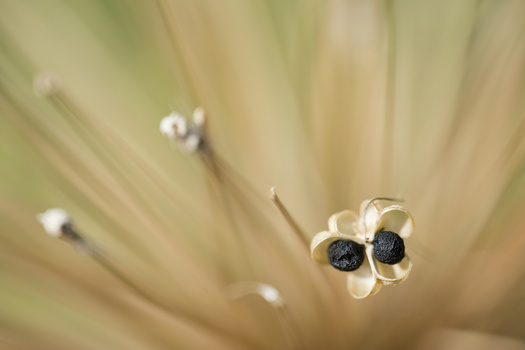 I took this at my usual spot in the Children's Garden in Rockefeller Park located in North Battery Park City. I seem to remember in previous years that by this time, there was usually much more growth. I'm not sure if it's because this year seems a bit cooler or if my memory is just faulty but either way, there wasn't a huge abundance of things to shoot.

But there were several of these spikey ball type "flowers". I've seen them around a lot before but usually they have purple florets and this one was almost exclusively brownish. I took a couple of shots and thought "these aren't very interesting". But it then occurred to me that I am shooting with a macro lens and that typically means getting up close. Sometimes you forget the most basic things :)

There were a couple of buds here and there at the tips of the spikes so I got in real close to see what it would look like. It turns out that those spikes made a great background pattern with all of those straight, or relatively straight, lines radiating out from the central point. I will have to try and see if I can figure out what kind of flower this is in the future. I think it's pretty cool, especially up close.

This is a Giant Allium flower a little later in the season. But when looking at this in post, it looks to be a popcorn kernel that has just popped. What do you see here?