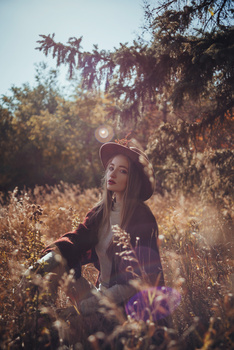 Will O' The Wisp

The model and I were aiming for a combination of crisp, fashion editorial looking shots and some dreamier, Instagram friendly shots. Obviously, the character of 30 year old optics lent itself greatly to the dreamy effect! I found that shooting into the sun wide open really exaggerated the lens flare and washed out 'filter-esque' look, so we worked some different angles until we hit this one. Shot just around jaw height on Haley I put some tall grass between us and used my free hand to "adjust" how strong the lens flare was by making it an adjustable lens hood of sorts.
As far as post processing goes - I first ran it through Lightroom, pulling the exposure back and then doing some back and forth between other images shot on the same lens to create a uniform look and toning to the images before I ported them to Photoshop for retouching. Mainly I stuck to my Basic, Tone Curve, and HSL modules to really enhance the gold wash of the grass and keeping the contrast softer than I usually would.
When I finished in Lightroom and started in Photoshop, I instantly set the image up using a blank 'Cleanup' layer, Pratik's dodge and burn action ran twice (once for global/face adjustments, and the second time I pulled the curve adjustments to be more extreme for details like hair highlights, lips, and eyes)
Lastly, I picked up some toning tips from Michael Woloszynowicz's youtube channel! This included using the dropper tool to select an avg skin tone and applying it to the image using a luminance mask which I then masked back to only apply to exposed skin, and then selecting a shadow tone the same way and applying it using an inverted luminance mask globally. The final steps in toning were to pull the grass more to an orange hue using an adjustment layer masked just to the grass, and a pair of curve adjustment layers. One for adjusting the black point and adding a touch of contrast, and another to remove some of the red color cast the image had.

James Tollefson
Within one Stem
0

James Tollefson
The Lines in My Hand
0

James Tollefson
Will O' The Wisp
0