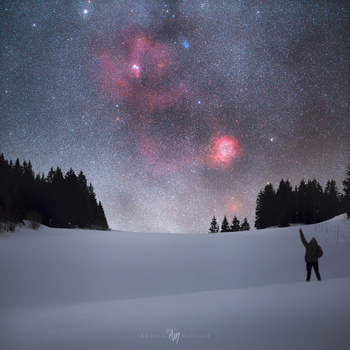 The Christmas Tree cluster was really unfamiliar to me just some years ago. However I knew its very bright neighbor, the Rosette Nebula- very well, as I have attempted to capture it many times. This time I tried to catch them both using a 135mm lens.
Canon 6D Baader modded + Samyang 135mm f/2
@ ISO 1600,, f/2.8, 40'' (15 stacked and tracked pictures for the background sky, 1 picture untracked for the foreground)
Pure night light pollution filter, Vixen Polarie.