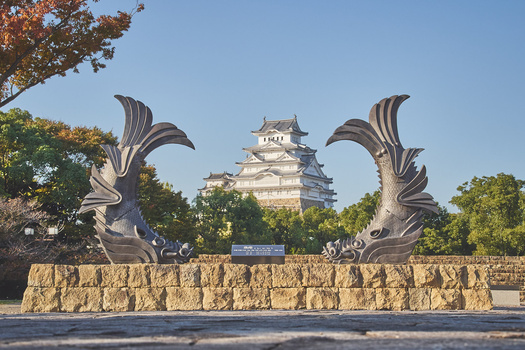 Himeji castle is on of the 12 original castles remaining in Japan. It is often reffered as the "White Heron" because of it's whiteness. This old castl was aimed to be destroyed in the 18th century, but the destruction was estimeted more expensive than keeping it.

Good for the tourism, because now it belongs to the World Heritage Site of UNESCO.

Most of the visitors coming from the train station enter directly in the castle area without trying to turn around the domain. This view as been caught in a small park mostly known by japanese people. I litterally had to lie on the floor to have the castle aligned with the fishs.

These fishs are similar to the ones on the top of the castle. Legend says that as they represent water, they protect the castle of incendies.