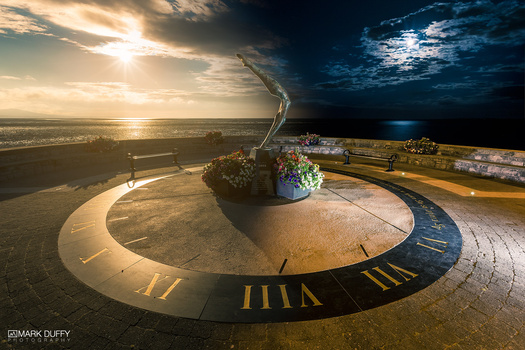 This photograph is 18 months in the making. I attempted this on three separate occasions to capture these set of photographs of both a sunrise and full moon rise. There are only two narrow windows of opportunity to capture this kind of photograph per year at the sundial (Millennium Monument, Blackrock Co. Louth Ireland).

Thankfully it all worked out for me on this occasion. I photographed the moonrise first at about 12am Tuesday night and returned seven hours later at 7am Wednesday morning to capture the sunrise. Each time the tripod had to be setup in the exact spot in order for the two photographs to line up. This kind of photograph can be known as either Day to Night Photograph or simply a timelapse photograph.