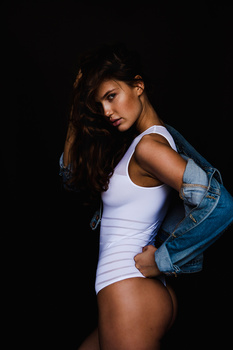 In Paris, apartments are tiny. 24m2 or 78sq ft. That includes my balcony. It is not optimal space for shooting, but there is a big pretty window and it's mostly unobstructed because we're on the top floor. Small Savage backdrop, me leaning out the forementioned window and a slice of old white Savage backdrop paper as a bounce on the floor results in this light.

Elisa was one of my first guinea pigs on this natural light and minimalist style of shooting. She told me later she was using some blush on her cheeks, but that was it. No Make Up artist, pretty much going back to basics.