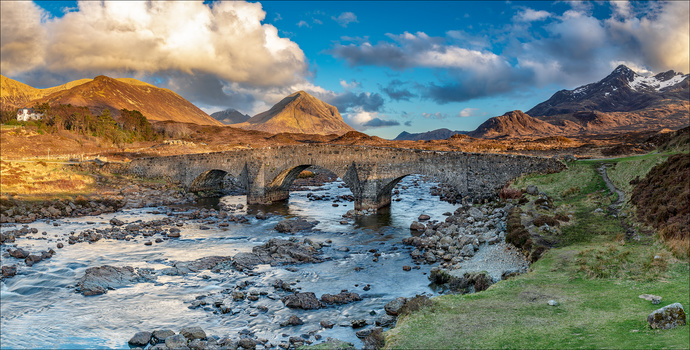 Located where the Black Cuillin meets the western seaboard is Sligachan. This is where to come to see the view that so often graces postcards and canvass alike of the Red and Black Cuillin with Glen Sligachan between them. There is an enchantingly picturesque stone built bridge in the foreground under which River Sligachan flows wide and excitable. Sgurr-Nan-Gillean looms large to the right, all black and menacing, crags and pinnacles, wreathed in unnatural wisps of cloud or with every crevice etched in snow she looks a merciless climb.

The myth of the waters which flow under the bridge. There are actually two legends to the waters.

Many years ago, on the Isle of Skye, there lived the greatest warrior woman of Scotland, Scáthach. Word of her greatness spread everywhere and one day it reached the ears of the greatest warrior of Ireland, Cúchulainn. Cúchulainn knew that he must go and fight this warrior woman of Scotland to prove that he is better. So he set sail for the Isle of Skye.
Arriving on Skye, Cúchulainn came across a trainee of Scáthach and demanded that her mistress should come and face him. Scáthach came to meet him to battle and prove which one was strongest. They fought and they fought. Their battle raged through the whole of the valley, shaking the earth. Animals fled before them, such was their ferocity! As they battled Scáthachs daughter ran down to the river and cried. She could not see how her mother could win.

As everyone knows, water allows a gateway between the faerie world and ours. Some of the faeries heard the cries of Scáthachs daughter and came to her. They told her to wash her face in the water of the river. She followed the faeries advice and was filled with the knowledge of how to stop the battle!
She ran back home to the lodge where her mother lived. Along the way she gathered herbs and nuts. Arriving at the lodge, she threw the nuts and herbs in onto the fire and fanned the smoke into the valley. Upon smelling the scent upon the smoke both warriors realised just how tired and hungry they were from the fighting, so they laid down their weapons and headed to the lodge.
Arriving at the lodge they were greeted by Scáthachs daughter who had prepared a meal worthy of two such mighty warriors. As Cúchulainn ate under the roof of Scáthach, he became her guest and as such they could do each other no harm.
Legend has it that if you dip your face in the river water by the Sligachan Bridge, you will be granted eternal beauty.

No part of this publication may be reproduced, distributed, or transmitted in any form or by any means, including photocopying, recording, or other electronic or mechanical methods, without the prior written permission of the publisher.
For permission requests, please email.