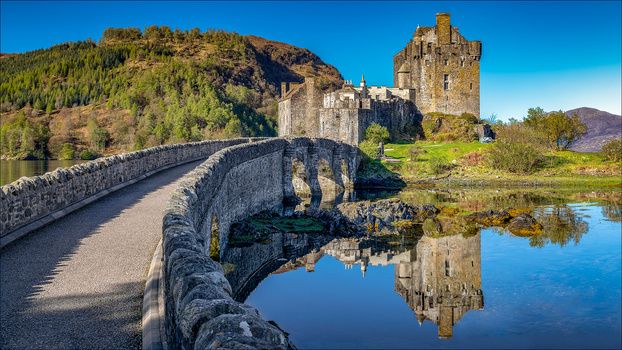 Eilean Donan is recognised as one of the most iconic images of Scotland  all over the world. Situated on an island at the point where three great sea lochs meet,Loch Duich, Loch Long and Loch Alsh and surrounded by some majestic scenery, it is little wonder that the castle is now one of the most visited and important attractions in the Scottish Highlands.
Although first inhabited around the 6th century, the first fortified castle was built in the mid 13th century and stood guard over the lands of Kintail. Since then, at least four different versions of the castle have been built and re-built as the feudal history of Scotland unfolded through the centuries.

Partially destroyed in a Jacobite uprising in 1719, Eilean Donan lay in ruins for the best part of 200 years until Lieutenant Colonel John MacRae-Gilstrap bought the island in 1911 and proceeded to restore the castle to its former glory. After 20 years of toil and labour the castle was re-opened in 1932.

There are four generations of the MacRae family past, present and future who are still the Constables of Eilean Donan Castle today.

No part of this publication may be reproduced, distributed, or transmitted in any form or by any means, including photocopying, recording, or other electronic or mechanical methods, without the prior written permission of the publisher.
For permission requests, please email.