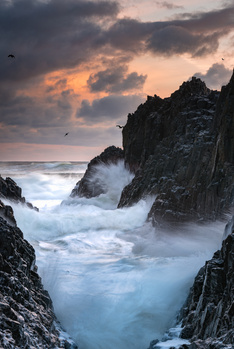 I captured this image on the Oregon coast last year and it really was one of those perfect scenes on a perfect day. We don't get much weather like this out here! It also helps that it is a pretty image that does a good job os telling a story about the scene itself.

Photography has become more popular and widespread that it ever was in the past. The quality of images has risen at an insane pace to match, but there is something lacking in many of the photos taken today. They lack a real story behind them connecting the viewer with something beyond a pretty picture.
As we march on creating images with wonderful colors, maximum dynamic range, and nice compositions it will certainly appease most people’s tastes for photography. I hunger for something more now though that most images out there lack. Capturing a story behind an image shown visually through the various elements in a frame is not an easy thing to demonstrate. It is a skill that I strive to master though.
Whatever the story may be it should create an emotion that a person viewing it connects with. A single sapling in a forest burnt to the ground is what I am talking about, or like I captured in 2017, a small seascape with waves crashing against the black rock as seagulls fly in silhouette against a sunset. It shows a story about a place through visual elements in conjunction. It doesn’t always happen for photographers because it is a rare moment. The key is seeking them out to capture.
Most of my photography is not a great example of in-depth storytelling. I am constantly trying to improve on this though because the art of speaking through photos fascinates me. These types of images hold so much more value and can be stared at for hours again and again never losing their importance, unlike a pretty picture.
I don’t think everybody should just stop taking beautiful photos. They still have their place and value today. It is still a skill being able to take an aesthetically pleasing image. In an ideal world, we could always have both beauty and story, but like most people, the beauty tends to be skin-deep. The story and what is underneath keeps us coming back.