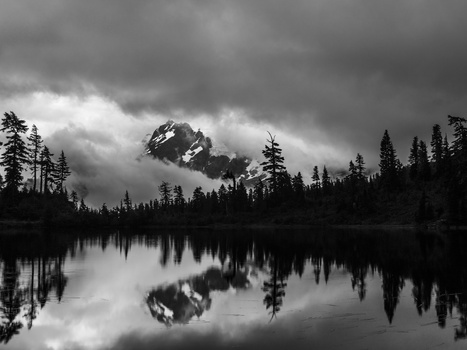 Upon arrival at this location I was surrounded in a cloud so thick that the alpine lake which was to be my foreground was almost invisible. I wondered after a few hours of staring into the gray clouds for any sign of the mountain if my objective would even be attainable. With barely a frame of reference to compose my image and with the temperatures dropping, I started losing hope. After what seemed like an eternity I noticed a variation in the clouds to the right of me. As it moved closer the cloud thinned and then lifted, exposing the lake and the mountainside beyond for a few brief moments. A few seconds later the mountain and lake were again swallowed by the clouds and were gone. I hurriedly looked at the LCD display on the back of my camera and was delighted with the image I had taken.

Stormy Shuksan portrays the mountain in a much different light than traditionally seen. I believe this image expresses an un-romanticized vision of the mountains. Oftentimes mountain conditions are less than ideal and weather can change on a dime. As photographers, being able to adapt to these conditions can open up a whole new world of possibilities.