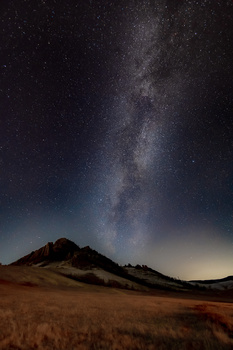 At such temperatures, it became frustratingly hard to stay outside to get all the exposures I had planned for - my tripod ball head could barely move and every minute my hands started to lose sensation and dexterity. With the small amount of ambient light that lit the hillside, I managed to frame the galactic center running through the middle of the exposure.