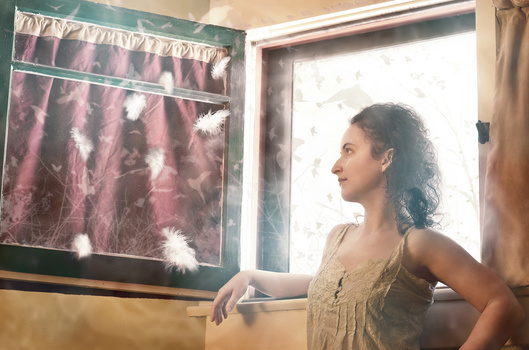 After Rectify's second season stunning season finale, I was despondent. I adore the show so, so much, I could hardly bear the thought of waiting almost a year for it to come back for its third season.

If you aren't watching Rectify yet, START NOW. You can stream the first season on Netflix now, and the second won't be too far behind, I'm sure. It has a style all its own. It's been called dreamy, thoughtful and "True Detective's quiet, moody art school sister." It's really not something I can do justice with words, you have to see and feel it for yourself. Get ready for a story told at its own pace, which draws you in with every nuance from its INCREDIBLE cast.

As I thought about waiting for the third season, I moped about all afternoon until I decided to turn the emotions into a self portrait. I wanted to play off the scene of Daniel discovering the feathers in his pillow; an experienced deeply steeped in meaning within the context of the show, but seemingly inconsequential. The dreamy light, the birds, the bits of nature, they all crept in without my consciously intending it, but as I kept working on the image, I saw the reasons they made themselves known.

So I will just say this, go watch Rectify right now :)

A blog will be coming soon with more detailed shots from this image!

Sarah Allegra
Water For The Free
0

Sarah Allegra
The Eye Of The Storm
0

Sarah Allegra
To The Lost
0

Sarah Allegra
The Court Of The Dryad Queen
1

Sarah Allegra
In The Lilac Wood
1