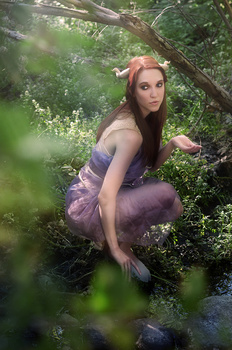 Water For The Free

But first, some exciting news about Dedeker! She was chosen to be one of the contestants on Fox's new reality show Utopia! While a part of me is sad to not have her around for perhaps a year, I'm also thrilled for her and I know she'll make the most of the opportunity. In honor of the show's premier last night, I put together a blog featuring some of my favorite photos of her from over the past four years we've worked together. Come check it out!

I've been wanting to incorporate a new race into DreamWorld for a while now; a race of deer-people called the Fallow Folk. In addition to all having horns and antlers of different kinds, they are a shy, reclusive species. As with many of the DreamWorld characters, they live in harmony with nature. I think of them as somewhat similar to Tolkien's elves; reserved, quiet but very able to take care of themselves.

I shot this with Dedeker the same day we shot The Oracle, and it's actually the same creek, just a different piece of it.

Again, big congratulations for Dedeker! I hope she has the time of her life :) And come to my blog to see my tribute to her!

Sarah Allegra
Water For The Free
0

Sarah Allegra
The Eye Of The Storm
0

Sarah Allegra
To The Lost
0

Sarah Allegra
The Court Of The Dryad Queen
1

Sarah Allegra
In The Lilac Wood
1