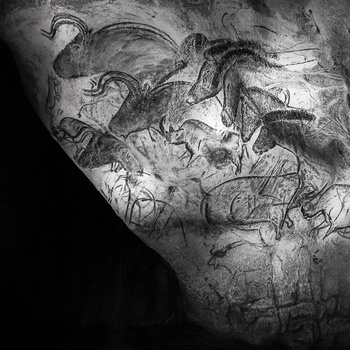 the first masterpiece of human kind.

36000 some persons depicted their beliefs in a cave located in the south of France. Now so called, Chauvet cave, this painting grotto is on the world heritage list and is famous to protect the first masterpiece of human kind.
By using b&w, I wanted to enhance what cave men created as they used the depth of cave to contrast with the whitness of rock and darkness of charcoal. We are in a deep part of the cave where sunrays never came in. LMen used some torches to enlight the cave. And not to meet a cave bear....
If you want, I have the colored version I can share.