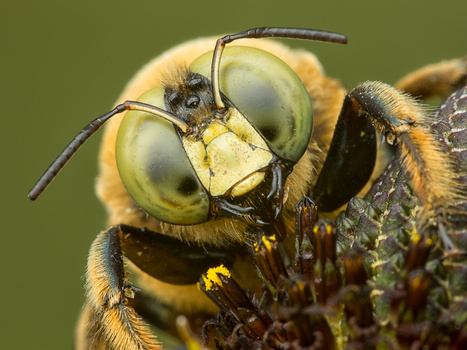 I’m used to finding the odd honey bee that camps out on a flower overnight but this is only the second time I’ve run across one of these. I remember the first time. It was 4 years ago. I was still enamored with my MR-14EX ring flash. Up until then I had good luck with the unit but when I shot the bee I got the dreaded donut highlights in the eyes. I tried for weeks to reduce the effects in post processing but it wasn’t to be. The highlights bothered me so much I never posted the images. After that experience, I decided to try other forms of illumination and finally settled on a speed light with a DIY concave diffuser box. For this shot I had the luxury of setting up the tripod rig as the bee was immobile for a long time. It’s always a risk doing this. Does one go in for the handheld photograph good for a few shots or does one gamble setting up the rig in the hopes of getting some natural light shots. The bee was in the shade so I suspected it would be a while before it gathered enough warmth to fly off. The gamble paid off as it took close to two hours for the bee to stir and fly off. Shooting exclusively in available light was a no go as there wasn’t enough illumination (even with reflectors and such) to shoot the frame at a reasonable shutter speed/ISO. I decided to augment the available light with diffused flash. Overall the images came out nicely but several were blurred due to wind. After a couple of hours watching and photographing the bee it finally flew off.

That is one very fine bee .. great detail .