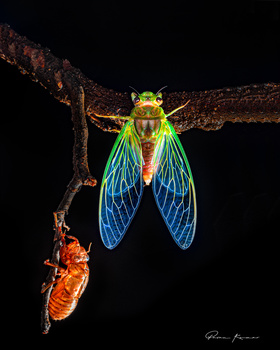 Found subject, ready to shoot, let's get over all that story. I'd seen a pic by one of my friends about three years ago or so, and was stunned by the whole thing! Didn't know these things moult and look colourful after that or if I'd ever find one for myself.. last year, we had seen a couple of them and I got a chance to shoot it for the first time.. then, had heard from Girish Gowda (who's a naturalist at Agumbe and who's shot several such cicadas) that torch from top or 12o clock gives out this amazing neon green colours on the wings of insect. Got a chance after some time and I shot, with blown highlights and weird texture on it. Wasn't happy, didn't get much time, didn't have a slave flash.

This year, it was fewer people and we could shoot this fellow quite comfortably! Some people had already started and I joined them late, as I wanted it to be in all its glory. There was one flash kept on a tripod behind the subject, for backlight. That is the reason we can see the structure on the wings quite well. Good - one thing less to worry about. Problem there? It had only one power and that was full 😅 couldn't be moved behind too much either, so had to cut light with aperture and then adjust other flashes accordingly. Second light - for these amazing colours to pop out, from below the subject, a tad behind it.. placed about two or three feet away from it. Third - a flash on my camera, diffused, to get enough light to allow details on the cicada itself. Took a shot to check exposure and it was pretty okay, but corrected it for the next one. And this was the result.

Of course, this wasn't the result sooc, as my beloved 50mm macro lens had condensation, yet again, in it and didn't hold any colour or contrast and I had to get them back during pp. A short time spent on Lightroom and this was the result.