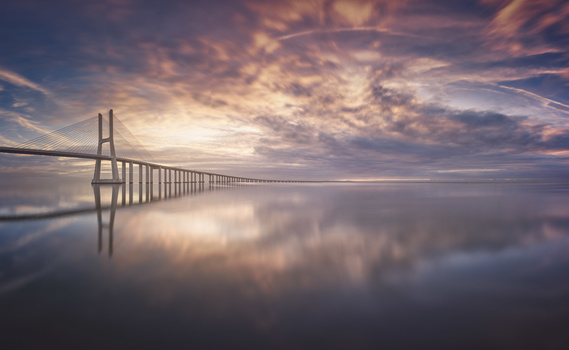 The alarm clock rings, we get up very early in a hotel in the centre of Lisbon and we go quietly to take the famous photo of the Vasco de Gama Bridge, I indicate to the GPS to take me to a small park where there are views of this fantastic bridge, total, we were already 4 years ago, no need to go during the day to see it, I said to myself the day before.
We set off and when taking the highway that leads to the bridge I realize that Mr. Maps intends to stop the car at the beginning of the bridge and if that, go walking to the viewpoint, I realized late and there is no turning back, shit! shit! and shit! We have to cross the longest bridge in Europe, turn around, go back, pay the toll and get to the mirador de marras, all this while you can see some beautiful red tones on the horizon.
At the end we arrived shortly after sunrise and there were still colors in the sky, on top the tide was going down and it gave some very cool reflections for a couple of minutes, enough to take the picture.
It is neither the first nor the last picture of this place, neither the best nor the worst, but I just wanted to have my picture and my version, happy day to all!