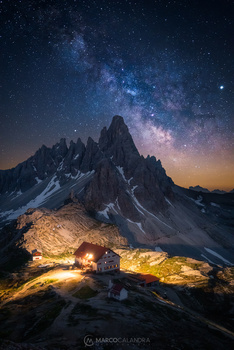 After having studied and analyzed the movement of the milky way during the summer months, I decided to visit the Dolomites with friends.
We visited places like Cinque Torri and the lake Sorapis, but eventually we decided to spend the last few days at the Tre Cime di Lavaredo.
We started from the Rifugio Auronzo reaching Forcella Lavaredo, from which it was possible to admire the three peaks in all their splendor, and later we finally reached Rifugio Locatelli.
From there it is possible to have a panoramic view of Tre Cime di Lavaredo.
We began to scour the area to look for excellent photographic points that would have been useful during the photo sessions, so we reached some caves used during the war.
After having photographed until and beyond sunset-time, we began to see the rising of the milky way.
We were at the right time at the right place to seize Monte Paterno and Rifugio Locatelli, with the Milky Way as protagonist.

Beautiful! Love how the presence of that building is adding a sense of scale. Keep up the good work. :)