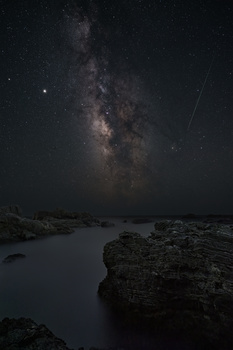 There are many rocks of various shapes that have been eroded by the waves here. And it is a place that is less affected by the city's lights. I captured the beautiful Milky Way and shooting star from the quiet sea.

I don't like noise, so the Milky Way is stacked with 30 images. The foreground is a separate shot with a long exposure to clarify the detail of the rocks. And while most pictures of the glittering Milky Way are generally of the Milky Way, I have recreated the view as seen by the naked eye in the post process.