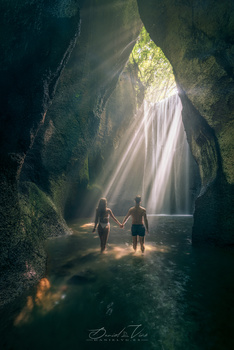 On our trip through Indonesia in the summer months of 2019, while we were in Bali, specifically near Ubud, there was a waterfall that we did not want to miss.
We arrived early on a day in which the forecast was clear, but at that instant it was cloudy, we had seen mind-blowing images of sunbeams sneaking through the water, so, we took the opportunity to see the rest of the environment and as soon as the sun appeared we went back there. The spectacle was magical, indeed, the rays of sunlight sneaking through the waterfall giving a heavenly image.
There we met a couple of influencers, @explorerssaurus_, whom I had the opportunity to immortalize next to the place.
With this photo I wish everyone a good week !!!!