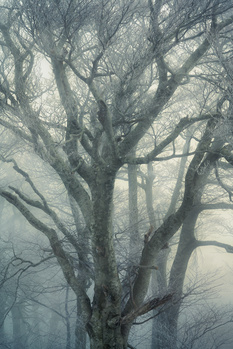 The weather forecast was for generally clear skies, but there was a possibility of fog below 2000 meters. So we started climbing in the middle of the night, aiming for the fog. As the sunrise approached, the ridge near the summit became foggy as predicted, so we dropped down a little and cut out the beech trees shrouded in fog.