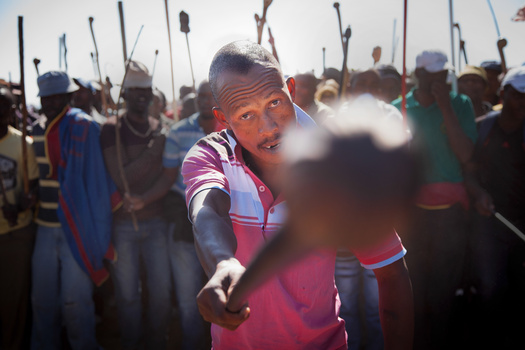 We Will not Break

– “He wena, ndoyiqhekeza lonto yakho ukuba akusuki phambi kwa,” says an Amcu member at the Wonderkop Stadium, four months into South Africa’s longest and costliest strike.
Translated it means: Hey you, I will break your thing if you don’t get out my sight.
It was on this day Lonmin issue an ultimatum, by text, for miners to report back for duty. In defiance, Amcu organized a mass gathering of 4,000 at Wonderkop Stadium in defiance.
The confrontation was brief between the miner and my 50mm lens. It lasted three frames before he was lost in the crowd. Only then did I realize how much of a risk it was taking the photo.
It was a rare moment that captured the underlying tension of anger and resentment between miners and the mine bosses.

Jay Caboz
The Edge of the World, Cape Point
0

Jay Caboz
We Will not Break
0
Related Photos & Videos