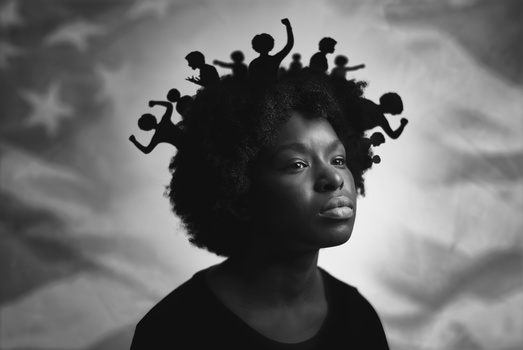 This image was created by taking photos of the subject as a silhouette on a solid white background and then importing them into Illustrator and making them vectors. Once I created the vectors I imported them into my Cricut and cut them out on black construction paper. After I had the cutouts we placed them in her hair to represent a crown.

The final image was created using two AD600s. The key light was modified with a 34-inch octobox and the other was pointed at the white background. I had the key light set higher than the background so that it took a split second longer to cycle. This allowed me to take two consecutive images. The first one has both the subject and background lit, and the second has just the background lit and the subject silhouetted. This made it possible to manipulate the lighting in post since the construction paper was slightly reflective.

Made me smile. Power to the people!