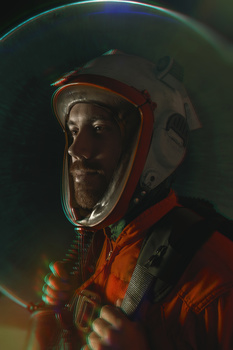 My friend created this costume and I had been wanting to photograph him for a while. We happened to be working the same event at the Kennedy Space Center and he was wearing the costume, so I had to take a photo of him.

I feel like he is going to work in a power plant some kind of post or even pre-apocalyptic planet. The planet has a power shortage because any power produced is critical to the survival of the human race. Every ounce of power the plant produces goes to a reactor that keeps the planet from imploding on itself. Or so that is what the wealthy elite tell everyone. Because without power, the people have no power.

Anyway, that is the story that comes to mind...What do you think?

AD 600 Camera left with a 34-inch octo-box placed behind the subject to light just the left side of the face. The fill was from a wall that was a few feet away from the subject. The background is a large rocket engine that is on display at the Kennedy Space Center.
I put a small Xplor200 behind the subject pointing into the engine with a blue gel.