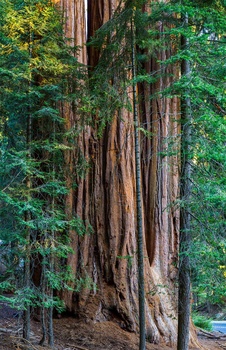 Giant Forest is a large sequoia grove, set on a rolling plateau between the Marble and Middle Forks of the Kaweah River in Sequoia National Park. It is the largest of the unlogged giant sequoia groves, and it contains more exceptionally large sequoias than any other grove. It hosts the largest living sequoia, the General Sherman Tree.