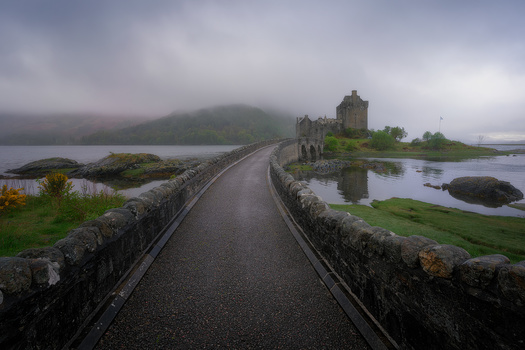 Eilean Donan is a small tidal island situated at the confluence of three sea lochs (Loch Duich, Loch Long and Loch Alsh) in the western Highlands of Scotland, about 1 kilometre (5⁄8 mi) from the village of Dornie. It is connected to the mainland by a footbridge that was installed early in the 20th century and is dominated by a picturesque castle that frequently appears in photographs, film and television. The island's original castle was built in the thirteenth century; it became a stronghold of the Clan Mackenzie and their allies, the Clan MacRae. However, in response to the Mackenzies' involvement in the Jacobite rebellions early in the 18th century, government ships destroyed the castle in 1719. The present-day castle is Lieutenant-Colonel John Macrae-Gilstrap's 20th-century reconstruction of the old castle.
Eilean Donan is part of the Kintail National Scenic Area, one of 40 in Scotland. In 2001, the island had a recorded population of just one person, but there were no "usual residents" at the time of the 2011 census.