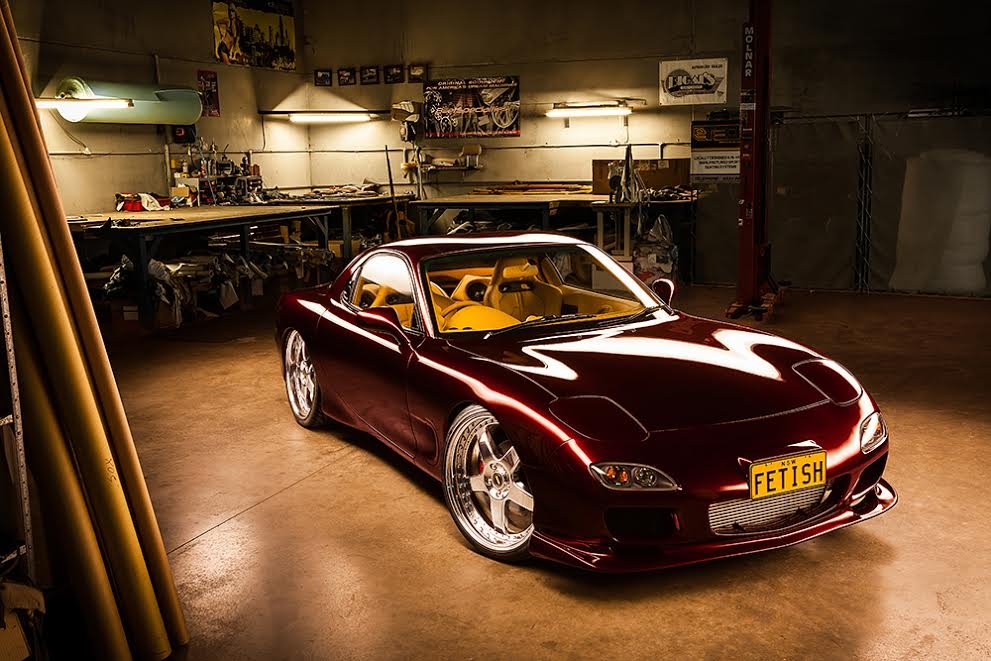 "I shot Robert's Mazda RX7 for a modified car magazine here in Australia and the owner asked if we could do the photo shoot inside the workshop of the interior trimmer who worked on the car. I've been getting more into lighting painting the exterior shots of the cars I shoot lately and had yet to try it indoors, so thought 'Why not!' The image is made up of six frames: the background was around 1.5sec @ f9, the rest were 25sec exposures also at f9, but with the workshop lights turned off. All were at ISO 160. I used a Yongnuo 300-LED video light panel through a cheap eBay 60cm softbox to light the scene (except for the background that was lit by the flouro tubes on the wall).

I hand-hold the LED panel and softbox and usually start by walking slowly down the long side of the car with an assistant (in this case my little sister) telling me where the light is hitting the side of the car. Each car is different in this case and it takes a few goes to learn how each one looks. In most cases, it involves walking down the side of the car with the light source extended up above my head. Lighting the roof, hood and front is usually done in one pass, simply walking behind the car from the rear to the foreground and with the light source above my head height. I continue along past the front of the car a little and shine the light over the nose as well. Once I'm happy with the captured frames for the side, roof and front, I take a shot for the wheels as well, holding the light lower to catch the white of the softbox on the rims and tires.

For this shot I used the foreground from one of the light painting frames, right up until the base of the work benches and the screens to the right. The cardboard tubes are also from one of the those frames, overlaid over the top of the upper section of the background plate to the left. I think it worked out OK. The zig-zag effect on the hood of the car was created naturally due to the shape of the hood. It was one straight pass with the light source to get that and it changes from car to car, but in the case of the RX7, adds to the smooth, flowing lines I think. One final thing I did was to create an additional variation on one of the main light painted images, saturating the red levels and brushing in parts of the lower half of the car where the reflections from the floor looked yellow on the sides and front of the body. Final tweaks were to clone out any dust and ugly reflections in the body, distracting scuff marks on the floor etc." -Ben Hosking (Hosking Industries)