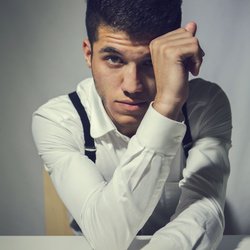 I was born in the 90s. Graduated from high school in 2010/2011, finished first year in "Paris-Sorbonne University Abu Dhabi" in 2011/2012, and dropped out because it was too expensive for me and I couldn't afford it on my own.

I directed and wrote my first 3D short film "C'est La Vie" back in 2011 when I was 17 years old. It was funded by Twofour54- Creative Lab after I won a competition. Afterwards, I decided that this is what I really want to do in my life, so I saved money, got my first camera and started getting experience by doing projects for fun and while working on the side to make more money to get more gear and improve myself.

So yes, I never studied photography or filmmaking because I couldn't afford to. That's why I'm learning it through practicing it. But most importantly, I do it for love and not just money.